Everton had a blank gameweek at the weekend thanks to the rescheduling of their fixture against Manchester City. With Pep Guardiola’s men involved in the EFL Cup final, the Toffees would get an extra few days to rest and prepare for what promises to be a thrilling encounter.

Cardiff City are coming into this fixture on the back of an embarrassing 5-1 home thrashing at the hands of a high-flying Watford. Their defence seemed to capitulate at the sight of Gerard Deulofeu’s sparkling runs and will be looking to bounce back against the Toffees.

Phil Jagielka’s knee injury is expected to keep him out of contention for this fixture as well and this could spell real trouble for Marco Silva. This means that alongside Michael Keane, the recovering Yerry Mina may feature.

Leighton Baines’ rib problem is set to rule him out of this fixture whereas the red card that former Chelsea man Kurt Zouma picked up in stoppage time at Watford is going to keep him out of this crucial encounter as well.

The 24-year-old is very highly rated in the English game and his mobility and reactions have been crucial to the Toffees this term.

Jonjoe Kenny was preferred to Coleman in the defeat at Watford and the Irishman will be confident of regaining his starting role.

The former Barcelona man might be forced to return to the first-team right after his injury because of the knock to Jagielka and Zouma’s suspension.

The England international has played 24 times for the Toffees this season. A sure starter.

Another import from Spain, Digne’s play has been sensational since moving to Goodison Park.

A member of the Toffees squad as a result of Everton’s raid of the Barcelona barracks, he has slowly started to come good over the last few weeks.

The Toffees’ primary midfield destroyer, Gueye has been a brick wall in front of the defence at times this season.

The Brazilian magician has been in scintillating form this season and the break last weekend would’ve certainly rejuvenated him.

A long-term product of the renowned Everton academy, Davies has been excellent whenever called upon.

The 29-year-old Icelandic midfielder is from a rare breed who uses his intelligence to work the ball.

A break last weekend would’ve certainly done the Turkish international a lot of good and he would be looking to add to his 2 goals so far this campaign. 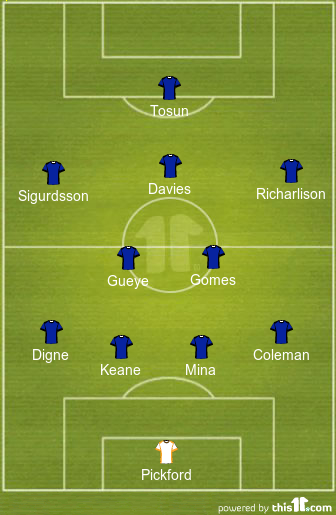