Rangers will be feeling quite confident going into this fixture as their last game in the Premiership saw them thrash Dundee by a comfortable 4-0 scoreline. This win was preceded by two back to back 5-0 wins against Kilmarnock and Hamilton.

With 14 goals scored and nought conceded by Allan McGregor, they are coming into this crucial fixture with momentum on their side. With Celtic seemingly running away with the league, this could be Steven Gerard’s only hope of winning a trophy and they will be looking to go for it.

Wingers Jamie Murphy and Eros Grezda are nursing injuries, which is guaranteed to keep them out of contention for this cup tie. The former is only expected back in mid-April.

Matt Polster and Andrew Halliday have both suffered groin strains that could keep them out of this fixture. While Graham Dorrans is back in training, he could still take some to get back to full fitness.

The 37-year-old veteran has been a key player for Rangers this season. His experience has helped the youngsters.

The Englishman has been in sublime form this season and has even contributed with 9 goals and 9 assists, which is excellent for a right-back.

The young Englishman’s value has increased this season after some extremely composed displays in the heart of the defence.

The 26-year-old is very much the commander of this Rangers backline and his performances have been inspiring.

The Croatian has been a vital member of this squad over the last few months and has chipped in with 3 assists as well.

The 27-year-old is a Scottish international and the control he brings to the team in the middle of the park justifies his addition.

The former Porto and Benfica man has been a massive success since making the move to Glasgow in the summer of 2017.

The 23-year-old Finnish international has made good use of his 17 appearances this season and has kept Steven Davis out of the team.

Canadian international Arfield played over 70 minutes of the 4-0 drubbing of Dundee and is in line to start again in this tie.

The 22-year-old loanee has come good this term and should start on the left flank.

The 22-year-old has been an absolute revelation this season and has scored 27 goals from his 39 appearances in all competitions. 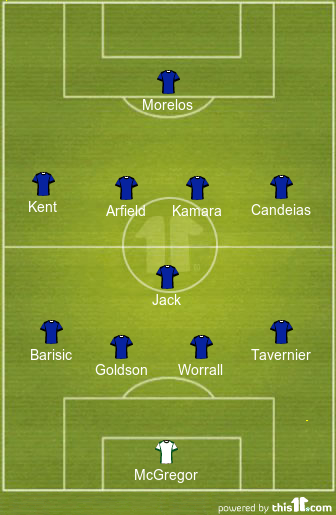