Tottenham have had an extremely mix bag of a week this time around. Having successfully overcome the massive hurdle of beating Borrusia Dortmund, they travelled to Turf Moor to take on a Burnley side who are still unbeaten in the league since the start of the New Year.

Spurs will be looking to bounce back when they travel the short distance across London City to Stamford Bridge where they are set to face a Chelsea side who will definitely be hurt from the tight penalty shootout defeat to Manchester City in the final of the EFL Cup.

Harry Kane’s return from injury will come as a humongous boost to Spurs fans everywhere and Pochettino wasted no time in bringing him back into the first-team picture last time out.

Other than this, Dele Alli remains sidelined with a thigh problem but is expected back within the next couple of fixtures while midfield destroyer Eric Dier has been hit with a viral infection which is going to keep him out of contention for this game.

This French World Cup winner will have to display very good reflexes if he plans to shut out the likes of Eden Hazard and Pedro.

The Belgian international has turned into a veteran for Spurs and will have to be wary of Hazard’s runs down the left.

A young centre-half who can certainly become a first-team regular at Tottenham over the course of the next few years.

Another Belgian international who is now a club veteran, his experience playing against Chelsea must come good in this tie.

Aurier has failed to impress too much in the presence of the highly successful Kieran Trippier but could get a start against the Blues.

The winger has now been converted into a proper midfield player and he has been consistent in the middle of the park for Spurs.

The young Englishman has really come to the fore under Pochettino this term and will be looking to keep his place in the team.

Another Spurs veteran, Rose has been crucial to everything positive that has happened at this football club

The Dane has been Spurs’ biggest creative outlet in the absence of star man Dele Alli and will have to be at his best.

The South Korean international really stepped up to the plate in the absence of Kane and Alli, and is expected to feature from the start.

The Englishman recently returned from injury and didn’t look very sharp against Burnley. He will be hoping to change that against Chelsea. 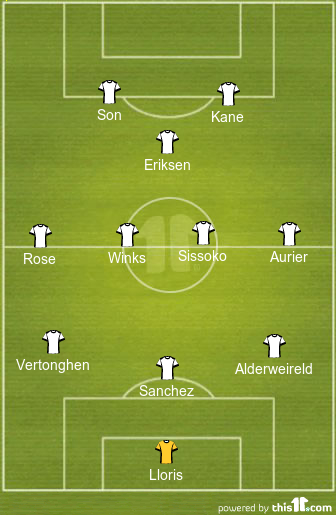