A shock 1-0 loss to rock bottom Huddersfield Town didn’t affect Wolves’ position in the Premier League table, with the club still sitting seventh. However, the loss did leave them level on points with eighth-placed Watford, which further puts the onus on a result against Cardiff City over the weekend.

The Molineux Stadium side take on Neil Warnock and his struggling Bluebirds, who’ve failed to win a Premier league fixture in their last two match-weeks.

To make things worse, Cardiff City have won only two of their last five league fixtures, losing against Arsenal, Watford and Everton. They are two points adrift of safety and have to win atleast half of their remaining games to have a decent chance of surviving the Premier League.

Wolverhampton, on the other hand, have a tough run of fixtures over the next month or so, with games against Chelsea and Manchester United twice. While winning won’t be impossible, it’s certainly going to be very tough, which is why they’ll have to make sure they start the month on a high.

Despite a heavy load of fixtures, Wolves have no injury concerns, with everyone fit and firing for the club. However, Ryan Bennett is one yellow card from a one-game ban, while both Diogo Jota and Ruben Neves have 8 and 7 yellow cards to their name.

Easily among the signings of the season, the Portuguese goal-keeper has been an incredible success story for Wolves.

The former Liverpool youth academy star is the captain of Nuno Espirito Santo’s side and is among five players who have played in every game so far this season.

The 28-year-old will have to be careful against Cardiff City and make sure that he doesn’t pick up a yellow card.

The former FC Porto star has missed only two games all season but baring that, he has been brilliant for the club. Expect him to keep his place.

Wolves and Nuno Espirito Santo’s maestro, the Portuguese star has taken to the Premier League like a fish to water.

Another revelation for Wolves, the 27-year-old has played every Premier League game this season and has produced 9 goals so far.

Another bargain buy, the former AS Monaco star too has played every Premier league game so far, creating seven assists from the middle of the park. Expect him to drop deeper alongside Neves to help control the tempo of the game.

While a large number of appearances this season for the 19-year-old have been off the bench, he has still started games against Chelsea and Fulham. This could be a chance for him to show why he deserves more game time.

Another former Monaco star, Vinagre should get a chance to show why he’s a promising prospect for Wolves.

Like many on this list, the on-loan Benfica star has played in every Premier League game so far for Wolves and he’s been in fine form, scoring four in his last five games.

The 25-year-old has struggled to make an impact this season, but has still played 18 games in the Premier League, scoring three goals. This could be his chance to prove himself. 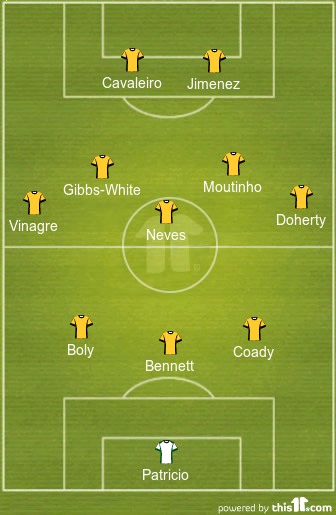