Here is a fun time pass! Thanks to Dailymail, we now know who fielded the shortest and the tallest team in the opening round of the Premier League fixtures and who fielded the lightest and heaviest set of players.

It doesn’t reveal any tactical set up of a team or the game play and tactics that they are going to use, but a little insight to the basics. As one would expect, Arsenal are amongst the shortest and lightest across the league along with newcomers Burnley, while Chelsea along with Stoke City, West Ham and QPR are amongst the front runners for the tallest and heaviest teams. 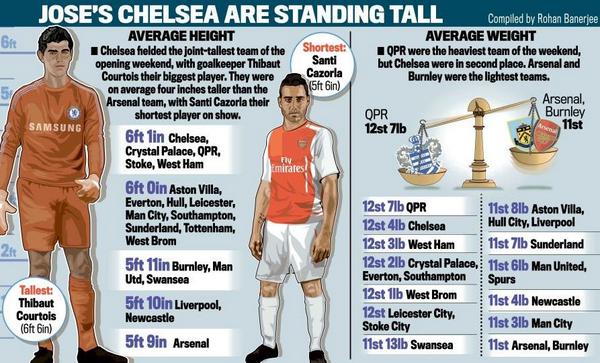 Although, Mertesacker missed out last week, his return might not add a significant change and the Gunners will remain one the shortest teams in the league as their starting XI will include the likes of Cazorla, Sanchez, Ramsey and Wilshere who are not among the tallest.