Another Brazilian midfielder is heading east to ply his trade in the Premier League, and the tactical implications of Paulinho’s North London arrival could be indicative of a stark change in Andre Villas Boas’ Tottenham Hotspur tactics.

Villas Boas’ time in England has seen him predominately switch between a 4-2-3-1 and a 4-3-3, the former utilized this season at Spurs and the latter used at Chelsea.

His premature sacking from Chelsea and his switch to a 4-2-3-1 this year at Spurs might suggest that his old 4-3-3, most effectively used during his tenure at Porto, was a striking failure. Regardless of how you interpret the reasons for that tactical change, a £17m investment in a defensive midfielder is a huge statement of intent from a team playing in Europe’s second string competition, especially when a number of Spurs fans would have unanimously agreed that Clint Dempsey and Gylfi Sigurdsson’s underwhelming performances might have warranted a substantial investment in the attacking midfield role instead.

Paulinho will now become Spurs’ third high class defensive-minded midfielder, and it seems highly unlikely that if he, Moussa Dembele and Sandro are all fit Villas Boas would omit any of them from his starting XI. With that in mind, it’s not unreasonable to think that a switch to the 4-3-3- as so effectively used at his time at Porto- could be the framework for Spurs’ 2013/14 campaign.

Rewind two years and that Porto team was quite something, full of flair and individual excellence, exceeding all expectations when it claimed 2 domestic cups, an unbeaten season (by a record breaking 20 points) and the Europa league. It would be naive to assume that Villas Boas’ Porto side was just a team of good players- there were many tactical features to that side, a credit to his managerial ability.

Attacking full backs are by no means a tactical revolution, but Alvaro Pereira and Cristian Săpunaru bombed forward relentlessly. Hulk used his sheer power to cut in from the right to support the superb Radamal Falcao, while Silvestre Varela played a more withdrawn wide role on the opposite flank. 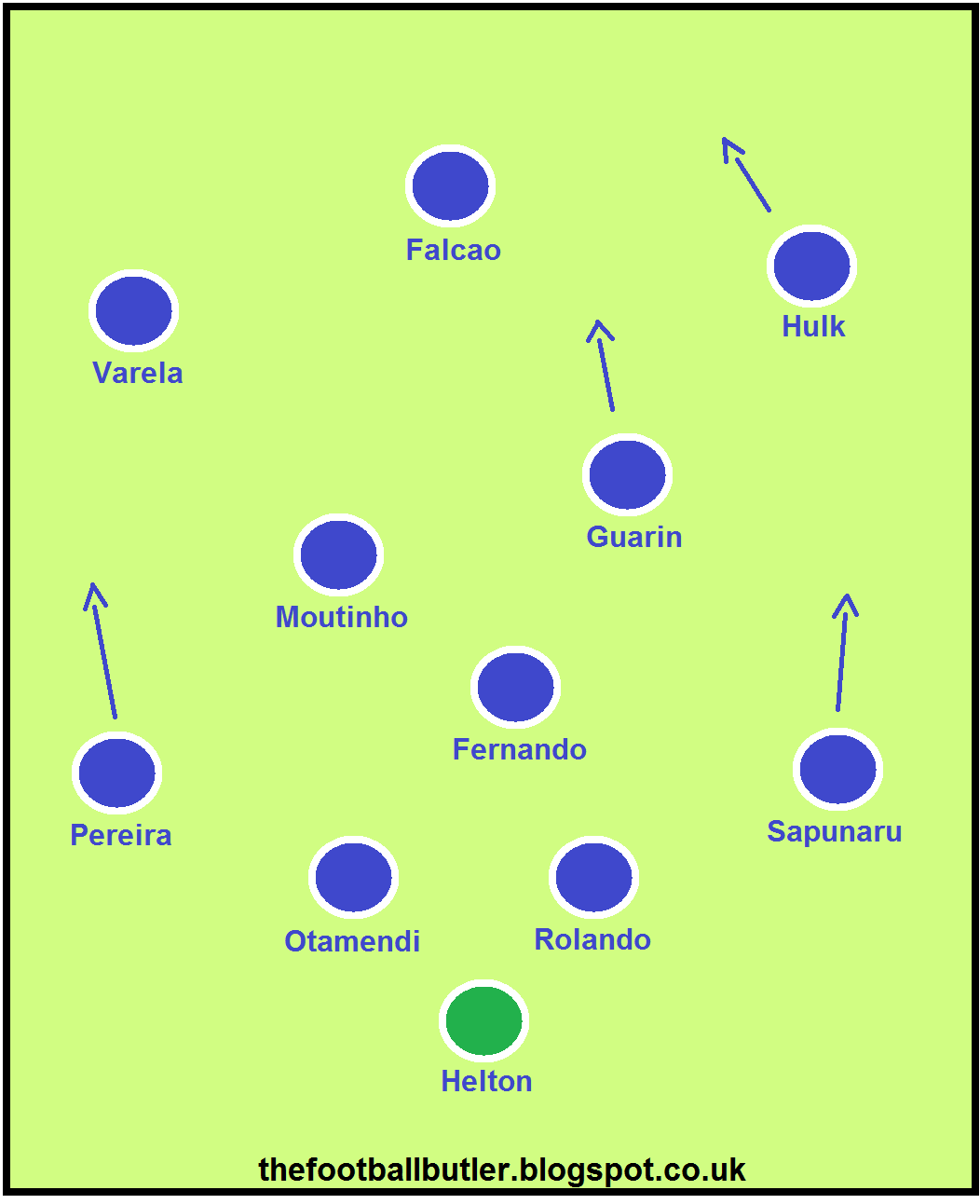 But the tactical highlight of that team was midfield rotation, an uncommon British tactical theme. The system primarily revolved around Porto’s no.6, the excellent Fernando, who tended to bomb forward despite being a pure holding midfielder, switching places with Freddy Guarin who usually had license to get forward, but would drop deep himself if Fernando advanced. With Joao Moutinho fulfilling an archetypal box to box role, Porto’s midfield had incredible variety, with opposition teams completely unable to track forward runs from anyone of those 3 midfield players.
Alas, midfield rotation- when it works- is hugely effective. Unfortunately, Villas Boas’ time at Chelsea proved that the Premier League was better suited with coping with such a system.
Villas Boas confessed his difficulties of applying that system to his unsuccessful Chelsea side:
“Our No 6 [at Porto, usually Fernando] sometimes became a more attacking midfielder and we tried to do that here [at Chelsea]. We decided it doesn’t work here, so that’s one of the things I have adapted. You lose a little bit of balance in the Premier League if you play that way. Transitions here are much more direct, making the importance of the No 6 to stay in position most decisive.”
Fast forward another 18 months and Villas Boas has yet to reinstate this tactic. But that could- could– be about to change with the signing of Paulinho. Whether Villas Boas is directly looking to reassert midfield rotation amongst his team is difficult to know, but Spurs now have the perfect players to carry out the system. Moussa Dembele is a fantastically mobile player, and is perhaps one of the finest box-to-box midfield players in Europe- the role that Moutinho played in that Porto team. Sandro is perhaps a finer version of Fernando, an intricately intelligent player who almost certainly is able to rotate with Paulinho- should Paulinho operate the advanced Guarin role.
England currently seems obsessed with the midfield variety of a holder, box-to-box player and a playmaker in a 4-2-3-1, with each midfield player playing a well defined role. The genius of midfield rotation is that it creates a far more fluid midfield, and omits having certain ‘specialists’ within the team. Villas Boas might just about be ready to play his trump card again. 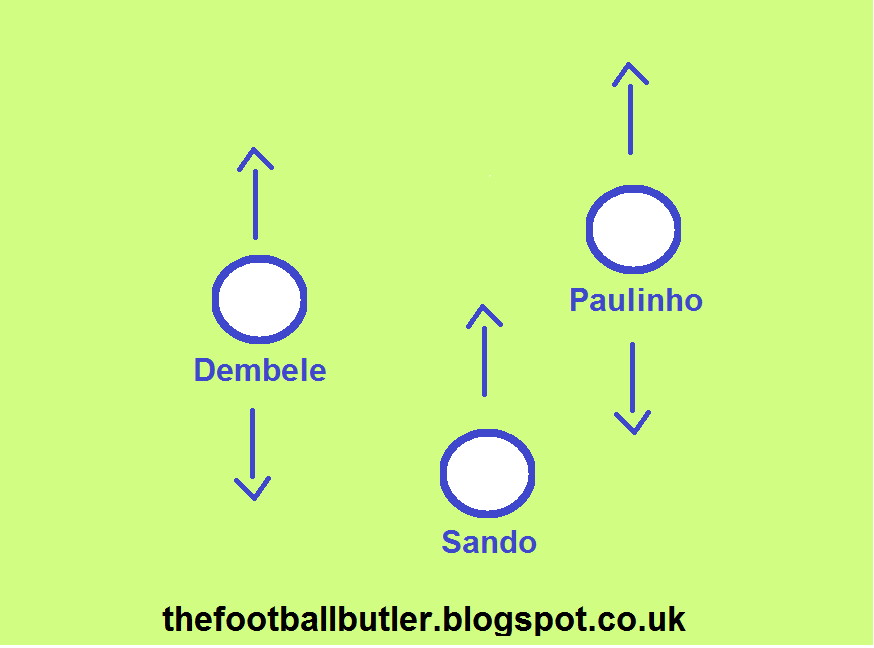 On a final, more general note, the 2012/13 season seems to have accentuated the use of the 4-2-3-1. Bar Barcelona and Juventus, 6 of Europe’s 8 Champions League quarter finalists (Galatasaray, Malaga, Dortmund, Madrid, Bayern, PSG), and 5 of England’s top 7 (Arsenal, Liverpool, City, Chelsea, and Spurs) stuck to the system. Granted, Barca (4-3-3), Juventus (3-5-2) and United (Ferguson played something like a 4-4-2 that looked like a 4-2-3-1) stuck to their own unique systems and found domestic success, but all three teams struggled in Europe.

If not playing the 4-2-3-1 is a path to domestic success by that rational, then perhaps Villas Boas’ acquisition of Paulinho could be a masterstroke in elevating to Spurs to Europe’s elite tournament. It’s still early days in this highly active transfer window, but Paulinho’s arrival could be the first major clue of changing tactical trends in the 2013/14 season.

Published in permission with Mike Butler