West Brom took an unassailable 3-1 lead after the break, thanks to Norwich goalkeeper Tim Krul fumbling a Rodriguez shot into his own net and Harvey Barnes’ terrific goal from the edge of the box.

Teemu Pukki pulled one back for the hosts before Hal Robson-Kanu restored West Brom’s two-goal cushion, only for Norwich skipper Grant Hanley to thump a header home from close range to make it 4-3 late on.

Norwich rallied on in search for an equaliser but West Brom held their nerves to claim all three points away from home.

Sam Johnstone arguably enjoyed the game of his life. Made a series of outstanding saves and also denied Jordan Rhodes from the penalty spot. Incredible start to life at West Brom. What a signing he is proving to be for Darren Moore.

Nyom spent much of the time staying forward and that left him exposed defensively. He was so easily beaten for Pukki’s goal.

Hegazi was sloppy in possession and looked well of the pace. While the Egyptian was defensively poor, he assisted Robson-Kanu with what turned out to be the winner.

Just like his central defensive partner, Bartley was poor too as he looked sloppy throughout the afternoon.

Gibbs was so close to wrong-footing Krul with a deflected strike. He looked sharp in defending. Was substituted at half-time.

Livermore was dispossessed in the run-up to Norwich’s penalty. He was good defensively but offered very little going forward. 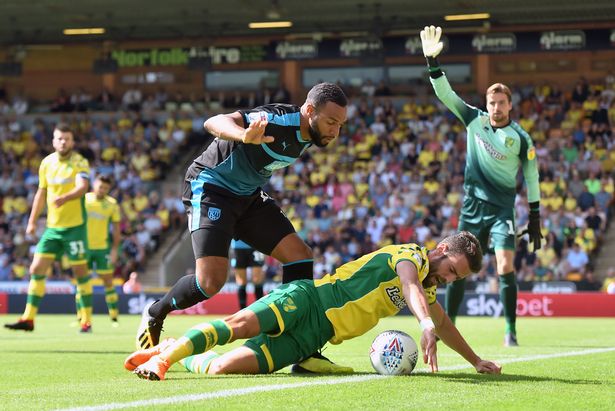 Brunt showed his usual energy and intensity on the pitch. Worked hard and never stopped running.

Rarely influenced the game in the first half. Townsend’s entry into the game helped Barnes get onto the ball more and impact the play in the final third. Scored an absolute stunner from the edge of the box.

Always a threat from the flank with his dribbling abilities. Produced two excellent crosses and two goals but he failed to fulfil his defensive duties.

Gayle showed a lot of industry alongside Rodriguez. He was tripped inside the box, with Rodriguez scoring the resultant penalty. His blistering pace and movement caused all sorts of problems to the Norwich defenders. Took a fantastic penalty to level things up and was fortunate to grab his second, thanks to Krul’s mistake. Showed his ability in the attack, proving to be a thorn for the hosts’ defenders. Also helped his team while defending.

Townsend came in for Gibbs after the break and immediately set onto help his teammates. He looked sharp, lively and defended very well with a crunching tackle on Srbeny being the highlight of his game.

Read more: Why Newcastle are the winners in the swap deal involving the signing of West Brom star

Came on with 25 minutes left to play and scored a fantastic goal.

Morrison was sent to pack the midfield and he stuck to his job.