In a sombre game for Celtic who paid tribute to former player Liam Miller who sadly passed away this week, Celtic sneaked past Partick Thistle to make it through to the next round of the Scottish Cup. They were well below par at the back and Brendan Rogers said that his side must improve for the game against Zenit on Thursday.

The game started well for Celtic, who managed two quick goals from James Forrest before gifting Partick a way back into the game due to a mistake from Simunovic. James Forrest got his hattrick in the second half before Conor Sammon got a goal to make things difficult for The Bhoys at the end of the game. However, they were able to hold on and go through to the quarterfinals of the competition.

Craig Gordon’s deputy did not cover himself in glory this game, and the goalkeeping department is clearly a weak point for the Hoops. He did manage to hold Partick at bay at the end of the game but it was far from a convincing performance.

The whole stadium had their hearts in their mouths when Lustig went down under a strong challenge early on in the game but he recovered to put in the most assured performance in of back four.

Largely anonymous next to his partner who made several mistakes. He has had better periods of form and will be disappointed that he wasn’t able to keep Partick at bay more successfully.

One of those games for the big Serbian to forget. Was muscled off the ball by Conor Sammon for the second goal but his mistake for Thistle’s first goal was a disaster and he will be very disappointed with his overall play.

A solid performance from Tierney. Always offered a different option in attack and wasn’t troubled too much in the defence.

Brown is at the heart of everything that is good about Celtic, and often started off the attacking moves in this game. However, he struggled defensively and can be caught for pace. He put in quite a few strong challenges. 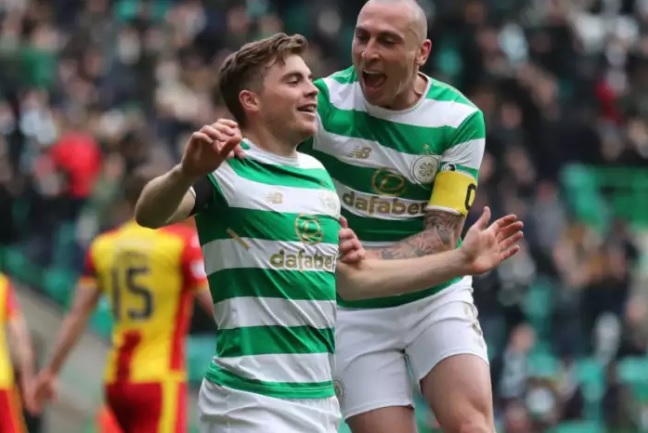 Not his best game, but neither was it his worst. His job was to get the ball and give it to the attacking players, and in that respect, he did a good job. However, once again, he left his back four exposed at some points.

The game of his life. Not only did he score 3 fantastic goals but he was absolutely everywhere. A thorn for Thistle today.

The Chelsea loanee had a solid game before being substituted in the second half. His pace stretched the Partick defence. He has been a solid performer so far for The Bhoys.

His performance deserved a goal but he didn’t quite manage it. His assist for Forrest was fantastic though, a really classy player at times.

He probably should have given away a penalty for a push in the back when Partick Thistle were starting to come into the game. He wasn’t at his flowing best and is struggling for form this season.

Fine performance and good to see him on the pitch. Offers Rodgers a different option.

Not enough time for him to make an impact but is still a good option for the Zenit game on Thursday.

Came on so that James Forrest could get a standing ovation. Nothing to do.