Tottenham hosted rivals Arsenal in a hugely important North London Derby. Mauricio Pochettino’s side faced the fear of the Gunners closing the gap between the pair to just a single point.

Jan Vertonghen passed a late fitness test for the hosts and started on the left side of a three-man defence. 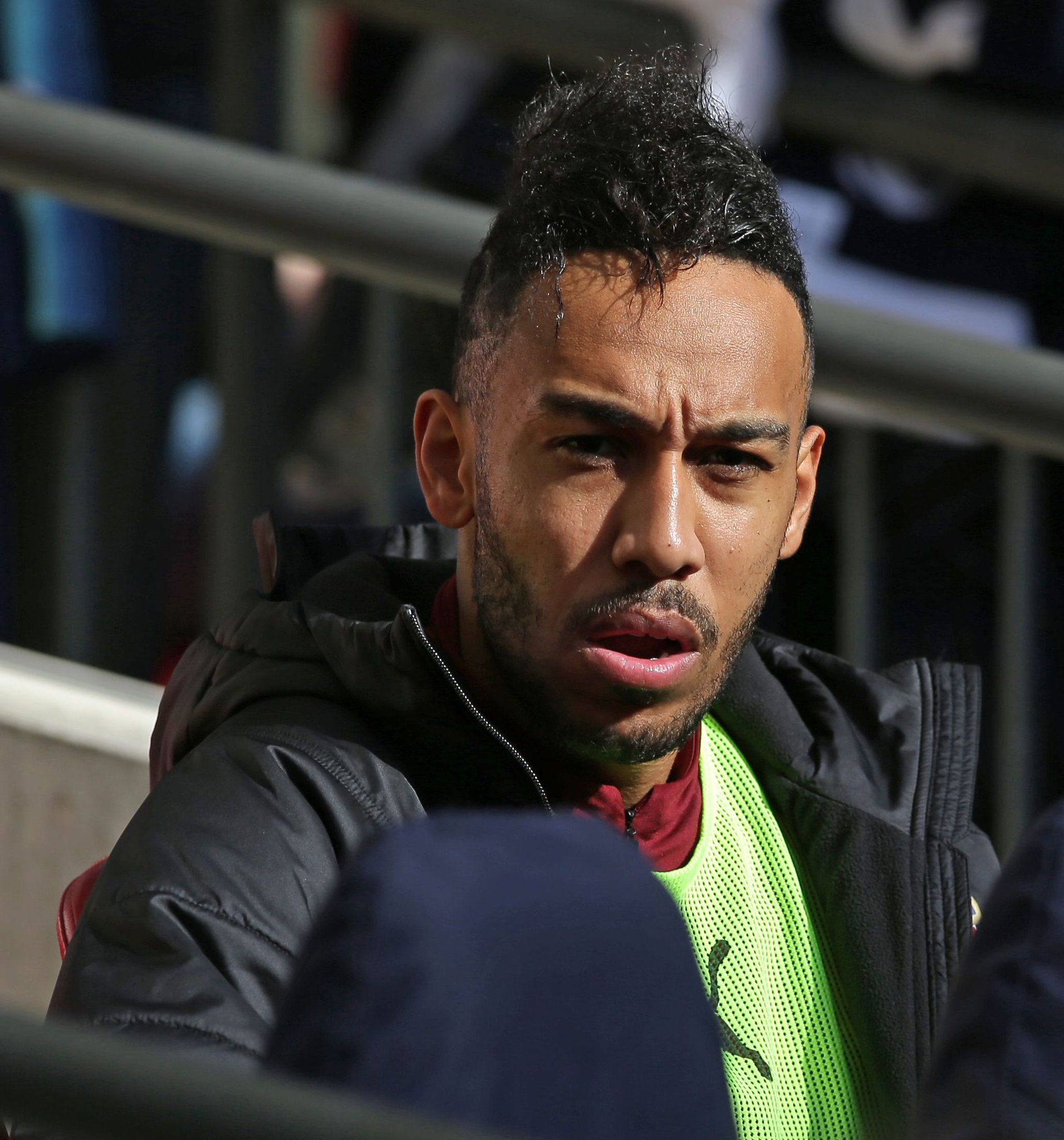 The first chance of the game fell to Alexandre Lacazette after a deflected pass and the Frenchman missed a difficult volley chance. Tottenham maintained early possession but failed to create a meaningful chance.

Arsenal were not at their usual pressing best but were smart in their positioning and gave Mauricio Pochettino’s side little space to work with. The Gunners opened the scoring after Lacazette’s pass put Wembley king Aaron Ramsey through on goal and the Welshman sat Lloris down and finished with ease.

Spurs again found it difficult to create anything in the final third with both of Arsenal’s wingers tracking back to help the full-backs. A freekick by Kieran Trippier in the 27th saw Harry Kane head the ball home but was rightly disallowed as the Englishman was clearly offside.

Alex Iwobi drove into the 40th minute and his right-footed strike was saved by Lloris. Spurs really looked to turn up the tempo in the dying minutes of the first half but Bernd Leno’s spectacular double save kept the Gunners lead. Leno saved a close-range shot from Eriksen before making one of the saves of the season to deny Mousa Sissoko. 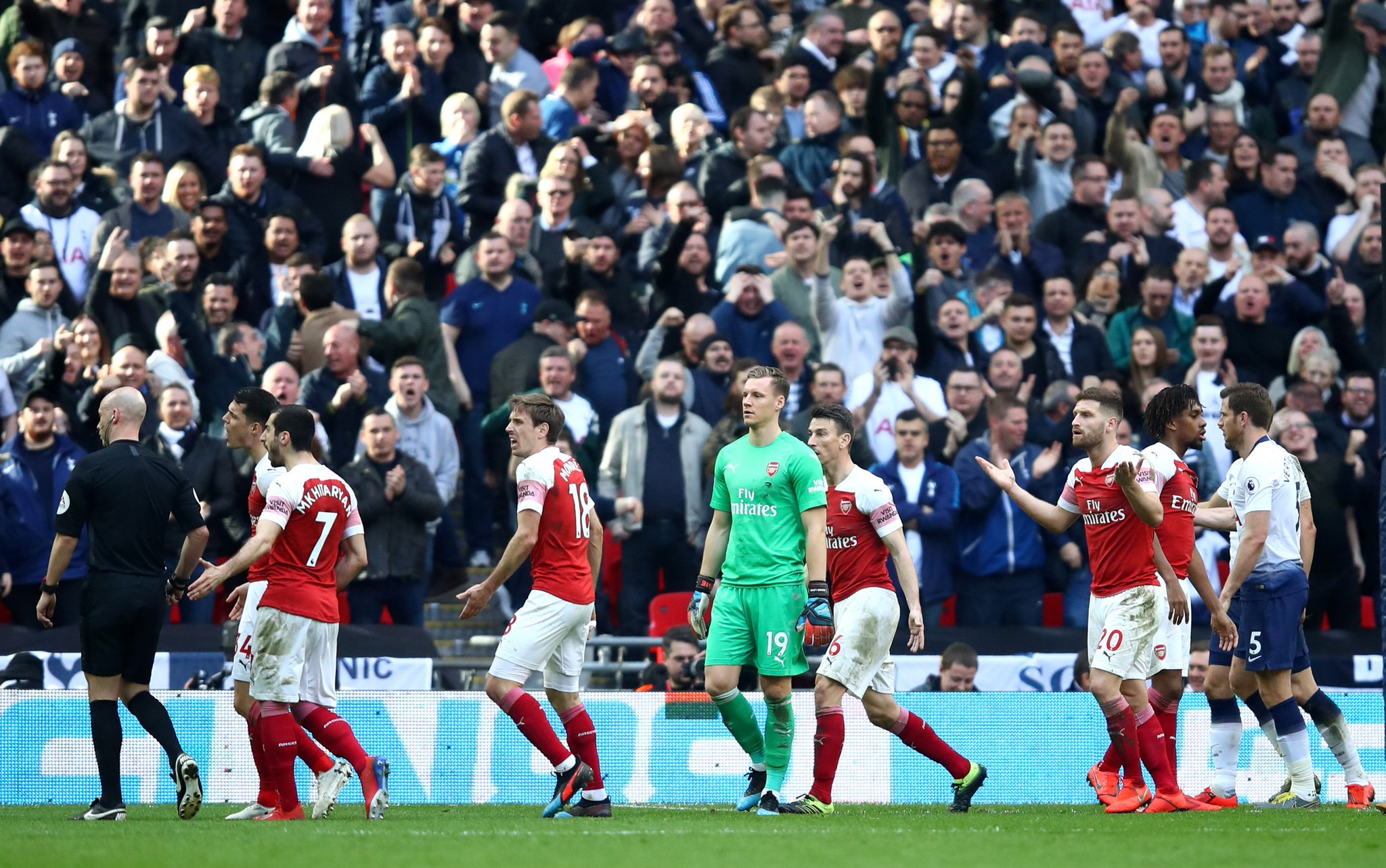 Arsenal deservedly went into the change rooms at half time with a 1-0 lead.

Lucas Torreira came on for the Gunners at the start of the second half in place of Matteo Guendouzi. The first chance of the half fell to Alexandre Lacazette after a brilliant build play on the left-hand side from Iwobi and Monreal but the Frenchman fired just wide.

The miss turned out to be his last contribution to the game as he was replaced by Pierre-Emerick Aubameyang. Spurs made their first change by bringing off Wanyama for Erik Lamela in the 59th minute. The Argentine picked up a yellow card after a poor tackle and Granit Xhaka. 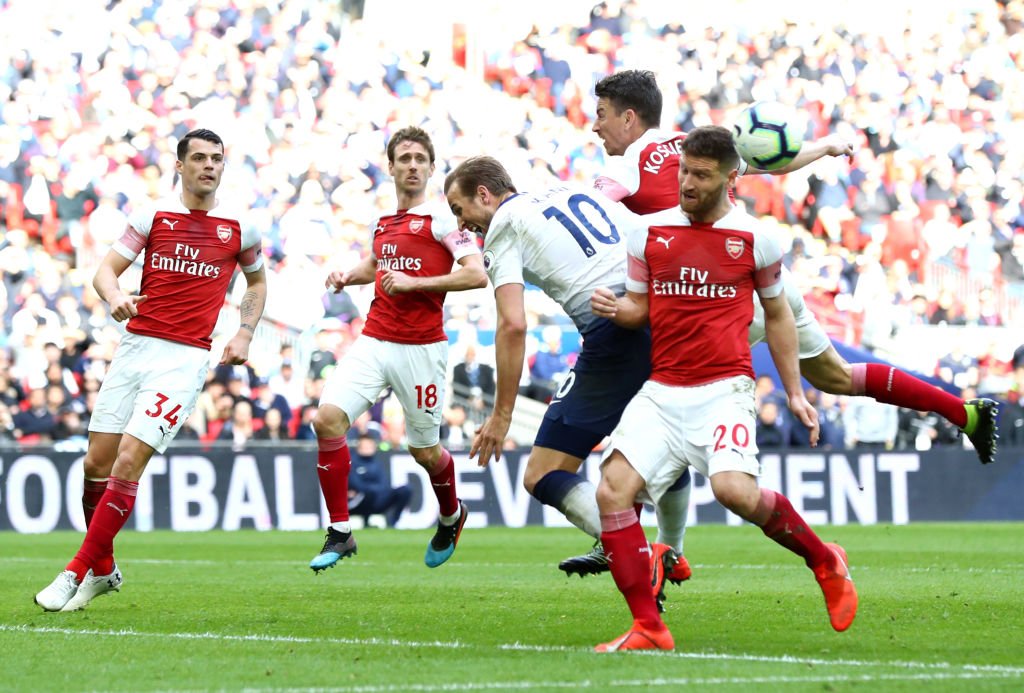 Danny Rose was the next Spurs player to go into the book after a studs-up challenge on Bernd Leno. The Englishman’s challenge looked nasty and was arguably lucky to stay on. Arsenal continued to frustrate their North London rivals who looked clueless in the final third. Mesut Ozil replaced goalscorer Aaron Ramsey in the 72nd minute and the Welshman received a standing ovation from the Arsenal fans.

Harry Kane, who looked offside in the replays, was pushed by Mustafi in the box and the referee awarded the hosts a penalty. Kane sent Leno the wrong way and levelled the game for Spurs. Granit Xhaka was booked in the aftermath of the penalty due to dissent. 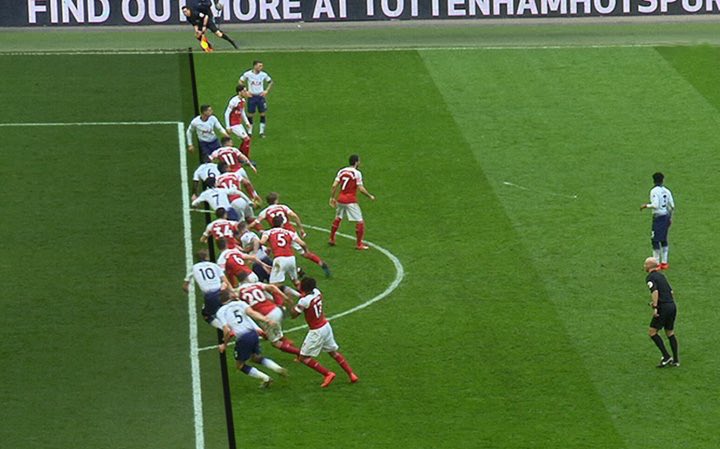 Fernando Llorente replaced Son in the 78th minute as the hosts looked to kill off the game. The Spaniard was booked 5 mins after for an unintentional elbow in the face of Laurent Koscielny.

Arsenal won a penalty in the dying moments of the game after Davinson Sanchez pulled Aubameyang in the box. The Gabonese’s kick from the spot was saved by Hugo Lloris as Spurs held on. The drama continued as Lucas Torreira was sent off in the final minute of stoppage time after a tackle on Danny Rose. An enthralling 90 minutes came to an end as the hosts held on to a 1-1 draw into then.

Officials cost us top 4. Proper officials or VAR and we win this game. pic.twitter.com/uiwZdm2Cqx

Should have won the game. If it wasn’t for VAR Spurs would end up in 10th place. Disappointed but the lads played well.

If you need anymore evidence of the @FA being biased, the last 95 minutes is all you need. Kane and Poch shouldn’t be there, offside for penalty, poor red card decision. That’s just touching the surface of their preference for Spurs.

vertonghen clearly 5 yards in the box when taken and stops the tap in. Blind referees. pic.twitter.com/S3TS5QOPP5

Was ready to run around the house if Auba scored that penalty but it wasn’t to be. Overall we’ve taken 4 points from Spurs this season and have to keep the big picture in mind. Focus on Rennes and then Man United next week which will decide the race for 4th. #COYG #Arsenal

Good performance from the team today. A poor decision has cost us the game. Keep your chin up @Aubameyang7 you will make up for that missed pen before the end of the season I’m sure. Not a bad point we move on to the next game.

Shout out to @HenrikhMkh tho, had his best game in an arsenal shirt today created chances got back to defend and ran the whole game hope this form continues for the rest of the season pic.twitter.com/r2B9jDYdtO

I often criticised the lads but today the boys made me proud 💪💪💪 There was a fighting spirit, game plan and fantastic teamwork. All we missed was a bit of luck in the end. COYG ❤❤❤ London is red ❤❤❤