Nottingham Forest travel to DW Stadium on Sunday as they look to beat Paul Cook’s Wigan Athletic in the Championship.

Sabri Lamouchi’s men have not lost in the Championship since the opening day of the season, and have won four of their last five league outings. They sit joint-top of the Championship table and come into Sunday’s game on the back of a narrow 1-0 victory over Brentford.

Wigan, meanwhile, are struggling at the other end of the table with an inconsistent run of results so far, though they have picked up two wins in their last four games.

Tendayi Darikwa has undergone surgery on his right knee after suffering a ruptured ACL on the eve of the new campaign.

Yohan Benalouane continues to be sidelined with a backline injury, while Michael Hefele is edging closer to full fitness from an Achilles problem. Carl Jenkinson could miss the upcoming game with an ankle injury but the likes of Alfa Semedo and Michael Dawson could return.

Samba won the club’s Player of the Month award for September. He already looks like a player who could become Forest’s number one goalkeeper in the years to come.

Cash has nailed down his place in the team at right-back. He should start against Wigan.

Worrall has been an ever-present at the back for Forest this season, going from strength to strength after returning from his loan spell at Rangers.

Summer signing Chema, who joined from Levante, should partner Worrall at the back on Sunday.

Ribeiro’s early performances in a Forest shirt have been excellent and he deserves to keep his place in the team.

The veteran midfielder should come up against his former club at the weekend. Watson has done well this season and should start in the midfield.

Sow has formed a solid understanding with Watson in the middle of the park in recent weeks and will be a big player for the Reds on Sunday.

Lolley has started the season well with three goals and an assist in 10 games. He’ll start on the right flank.

Tiago Silva adds creativity and flair to Forest’s play in the final third and he could make a difference at Wigan on Sunday.

Carvalho has the ability to win games on his own, although he hasn’t set the world alight in the Championship. The Portuguese will be raring to make an impact.

Grabban has been the Reds’ chief source for goals this season and he can be a real handful for the Wigan defenders on Sunday. 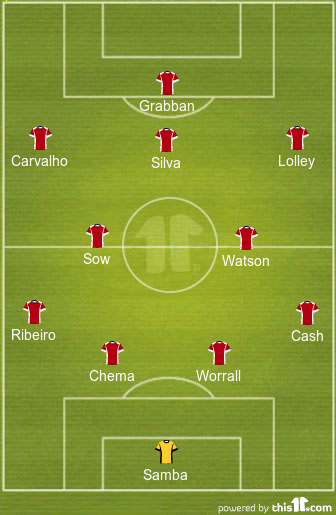