Arsenal began this game on the back-foot as expected. With Chelsea increasing their goal difference by 5 yesterday, recapturing 4th place tonight would’ve been an absolutely Herculean task for the Gunners. Arsenal lost the game 3-1 on the night, thanks to a fantastic Sergio Aguero hat-trick.

As the game kicked off, Manchester City began looking more likely to score and as it turned it out, it took them just 46 seconds to open the scoring in this high-profile Premier League clash.

An early City attack was thought to be thwarted by the Arsenal back-line before some highly questionable decision making from Alex Iwobi saw Laporte steal the ball on the edge of the Arsenal box. 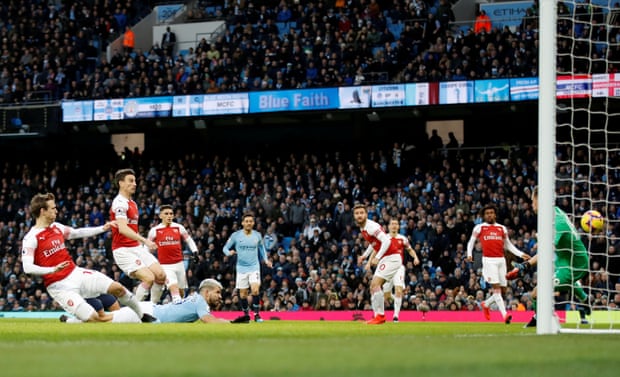 Within seconds, he was past the opposing defender and his low cross was headed home by Aguero to make it 1-0 to the home side before the clock had struck one minute.

It took Arsenal just 10 minutes to come back into the game though, as it looked like they were prepared to soak up all the City pressure and try and work on the counter charge. One such counter-attack led to a corner which was delivered by Lucas Torreira from the left.

A high ball to the near post was flicked on by Nacho Monreal, and Laurent Koscielny, who had lost his marker, pounced on the ball right in front of Ederson, giving the keeper no chance at all to make it 1-1 on the night. 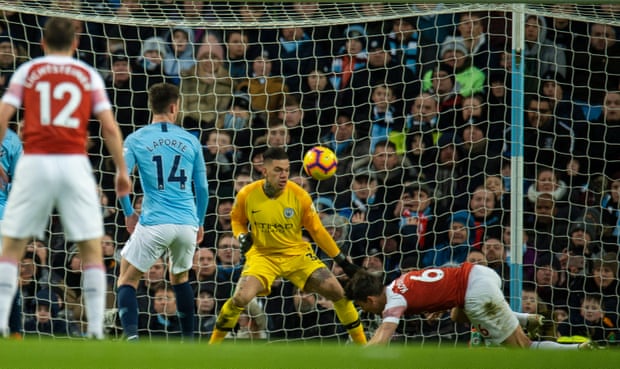 Spurred on by the equaliser, City began to apply pressure yet again as they kept creating good chances. Both wingers were playing low crosses and the Gunners’ goal was constantly under threat.

It was finally in the 44th minute that City got back into the ascendancy. The ball found Sterling on the left flank. He easily dribbler a defender before heading to the byline and putting in a low cross which went past the goalkeeper and found an open Aguero at the far post.

As usual, the Argentine talisman made no mistake as he scored his second goal on the night from two yards out and put the home side back in the lead as the game went into half-time. 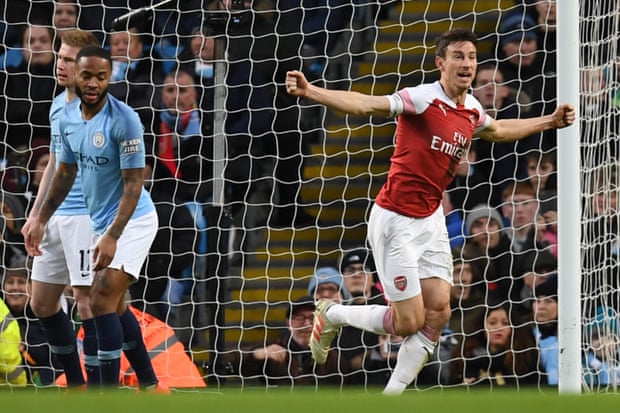 Going into half-time a goal down, Arsenal fans would’ve expected their team to come into the second period all guns blazing but as it turned out, the trend of the game continued to favour the home side.

Dominating possession more than they did in the first half, City scored again in the 61st minute and no surprises here – it was Sergio Aguero again. They worked the ball well in the midfield and an excellent move was topped off with a good pass from Sterling.

He rolled it across the goal and a diving Leno got a touch to divert the ball minimally. It appeared to hit a sliding Aguero on the hand but the referee looked at his watch and gave City the goal. In just 61 minutes, the brilliant Argentine had got his hat-trick. 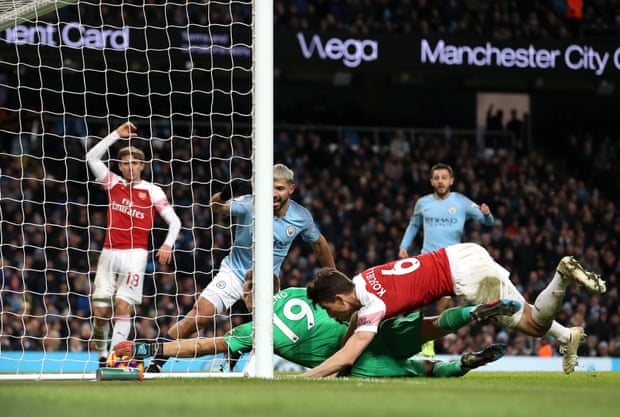 With only a third of the game to go, Arsenal weren’t up for it and Emery responded by bringing on Aaron Ramsey and new signing Denis Suárez to replace Alex Iwobi and Sead Kolasinac.

Read More: Arsenal opting out of a deadline day move for La Liga star is a blunder by the Gunners and they will regret it

As much as this was on the cards, it never really took shape because City managed the game extremely well and despite some good passing in the midfield, Arsenal were unable to create any chances and ended up losing this game by a 3-1 margin and gave the 5th place away to Manchester United.

Here’s how some devastated Arsenal fans reacted to the defeat to Man City:

City had 8 shots on target. Auba and Laca had 0 shots. It’s pointless to play 2 strikers with no creativity at all behind them!

Players should be ashamed after that. Not one shot in the 2nd half. £100k a week wages for what??

Iwobi should go clean his seat on the bench pic.twitter.com/3mm2zLz8Xa

City had 8 shots on target. Auba and Laca had 0 shots. It’s pointless to play 2 strikers with no creativity at all behind them!

Even Emery didn’t have faith in these players today#KroenkeOut