Former Derby County academy star Jordan Mutch was released by Crystal Palace earlier this month. While Mutch had a rather torrid time at Selhurst Park, things are looking up. English news outlet Bristol Live has revealed that Norwich City are interested in making a move for the 27-year-old as they to make a push for promotion.

The Championship side is currently third in the league table but still, they believe that they need the former Queens Park Rangers star to help them out (h/t Bristol Live). The 27-year-old was recently released by Crystal Palace but hasn’t made an appearance for them since January of 2017. While Mutch did join Palace at the prime of his career, things haven’t gone his way since.

An all-around action midfielder, the English international can do everything and anything that Norwich City need, which is a skill that few players on their books have. While his time at Reading and even the Vancouver Whitecaps saw Mutch slot straight in, the 27-year-old might take some time readjusting to the Championship after his time in the MLS. 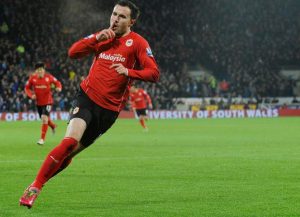 However, for Norwich City, the former Cardiff City and Watford midfielder does make a rather useful player. His versatility has seen Jordon Mutch play as a left and right midfielder, a central midfielder, a defensive midfielder and even as a number 10. While he doesn’t excel in one position, his composure and ability to play across the midfield makes him a great utility signing.

The fact that he’s a free agent adds to his value but with Bristol City also in the race for the former Crystal Palace man, Norwich City will have to act fast. But if they do make it to the Premier League, they’ll need someone far better than Mutch to survive the English top tier.

Read More: Norwich have to sign this 30-year-old classy operator to really finish the season in the top two

While the 27-year-old is a good Championship player, his ability to cut it at a higher level is questionable. In four years with Crystal Palace, Mutch only made 40 appearances in all competitions for the Eagles with a majority of them coming off the bench. His time in the Premier League had him making 78 appearances, with his last goal coming during the 2013/14 season with Cardiff City.

But if his spells at Cardiff City and even Birmingham City are anything to go by, Jordon Mutch is a great rotation star.