Liverpool are sweating over the fitness of Egyptian winger Mohamed Salah, who scored directly from a corner in mid-week only to limp off moments later. The Pharaohs were comfortably ahead and many will question as to why Salah was still kept on the field with a heavy schedule of club competitions looming.

The Egyptian has suffered a muscle injury and according to the Express, Salah will now return to Merseyside to undergo further tests and begin rehabilitation. There’s no time-scale yet on the current injury and the Reds are unclear as to when their talisman can get back onto the field.

Though there’s a good chance the former Roma star could miss Liverpool’s next Premier League clash against Huddersfield Town. However, Jurgen Klopp should be a more relieved man knowing that he now possesses an ideal replacement in the form of Xherdan Shaqiri.

Liverpool were often criticised for their lack of depth and cover in the attack last season and that is primarily why the Swiss international was brought in for £13m. Salah has also come under intense scrutiny this season after failing to hit the high standards he set last time out.

In Shaqiri, Klopp will have a player who can offer a different dimension as opposed to their Egyptian talisman. While Salah is a more direct player who likes to run at defenders and in-between spaces, Shaqiri is more of a technical output.

The former Stoke City winger is yet to score his first goal for the club, but he did pick up the assist for Daniel Sturridge’s stellar hit against Chelsea in the league two weeks back. Shaqiri has shown glimpses of his quality and has looked impressive whenever given a chance this season.

He has averaged a pass success rate of 83.1% in the Premier League this season. Though he was guilty of scuppering a glorious chance against Chelsea in the very same game, Shaqiri showed drive and energy after coming on. (Stats courtesy – Whoscored) 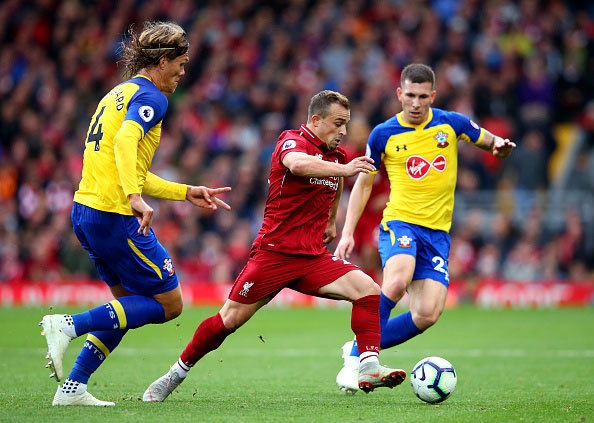 Under Klopp, he has slowly started to show consistency in his displays this season. During his time with the Potters, Shaqiri was often criticised for turning up in one game and then completely vanishing in another.

But given that his versatility allows him to function in a number of roles, Klopp should be able to bring the best out of the winger. Liverpool now enter a relatively calmer set of Premier League fixtures and now is the time for Shaqiri to prove his worth.