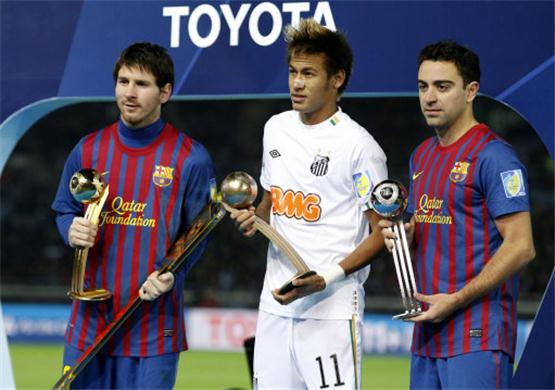 Two times South American footballer of the year, FIFA Puskas award for best goal, Best young player in the Campeonato Paulista, four times Best player in the Campeonato Paulista, first Copa Libertadores for Santos since 1963, Best player in Copa Libertadores, Young player of the year. 36 international caps and 22 goals, first Brazilian athlete to appear on the cover of TIME, over ten sponsorship deals, voted most marketable athlete on the planet.

All this at the tender age of just 21…

Neymar has it all… simply on top of the world. He is the next big thing.

Since Guardiola’s appointment in 2008, Barcelona started playing a divine type of football that put them on top of world football for several years, achieving many titles and breaking numerous records in the process. Some called it “Total football”, others labeled it “Tiki-taka”, but what was clearly obvious is that Pep endorsed Arrigo Sacchi’s claims that the next tactical revolution in the game (after his 1990’s Milan) would be the conversion of the pitch into a midfield area. What did he mean? A fluid, expressive, and proactive system that focuses on team work, off-ball movement, exploiting spaces, aggressive and collective pressure, positional interchange, specialists elimination and quick passing. A team that attacks as a unit, and defends as a unit, while building up play from the back. Watching such a system is a pleasure, but fitting in it is a whole other matter. Many players simply failed to grasp this philosophy, while others refused to sacrifice their individual capabilities to integrate into the team. If one thing is certain about Barcelona’s football, it is the fact that no matter how successful or talented a player is, by no means his fitting into the system is guaranteed. Will Neymar be an exception?

When it comes to Brazilian players, Barcelona has something of a bad history. Sonny Anderson, Geovanni, Henrique, Keirrison, Giovanni, and Rochemback, all came, saw, but did not conquer. If this indicates one thing, it is that non-European signings should only be completed after thorough analysis, and meticulous monitoring. Due to the major differences between European and South American leagues, a large portion of Brazilian imports choose to ply their trades at relatively small European leagues before stepping up to the big stage. Romario, Ronaldo, Vampeta, Matuzalem, Fernandinho, Alex, David Luiz, Ramires, and Ronaldinho are some of the players that comprehended Europe’s challenging football in less demanding leagues before making moves to big clubs.

Neymar did not take that path, and whether his magic will enable him to skip classes in his trip to the summit of world football remains to be seen. Club Icon Johan Cruyff rang the alarm bell upon Neymar’s arrival, clearly stating that putting two captains on a ship might result in the sinking of the ship. Cruyff’s explanation was that Neymar’s superior attributes do not guarantee his success in a hard-to-comprehend system, and given his hefty price he might not be afforded the required time to smoothly integrate into the team.

After last year’s disastrous defeat to Bayern, many questions aroused, and several gaps appeared. Gaps that should be bridged either with youngster’s promotion, or with dipping into the transfer market. While a defensive reinforcement is obviously needed, and still to be done. An offensive signing is also required to balance our forward line, and lend a hand to Messi with the quest of tearing opposition defenses, and scoring on a regular basis. Before delving into the names of transfer targets, the most reasonable thing to do is build a profile for the type of player needed to plug a certain hole in the team.

To further illustrate, Tito is in search of a quick, tall defender with good passing skills to complement Pique. That’s why Zubizaretta is fighting tooth and nail to acquire David Luiz, or Thiago Silva, and that is the exact reason why he passed the chance to sign Hummels, a static, slow defender with below-average passing skills. The profile required for our defender fits the two Brazilians but does not do the same with the on-form German. The same goes for our attacking search. But was Neymar signed according to similar methodical approach? Will he benefit our system more than a Rooney or Cavani-type of player? With the availability of Pedro, Alexis, Tello, and now Deulofeu, are dribbling skills required more than work rate? Is creativity sought after more than penalty box killer instinct?

As of June 2012, Barcelona’s net debt was approximately 320 million Euros. Given Europe’s critical economic situation, the board should definitely keep the club’s debt at the forefront of their strategic planning, but at the same time make sure to differentiate sporting matters from economical issues, in order to maintain the great heights the club has reached since 2008. Working tirelessly but separately on both matters is a guaranteed success on both fronts, while any miscalculation or mix up will hinder the club’s progress.

There is no doubt that his arrival will boost shirt sales, enhance our global image, and more than make up for the 57 million paid for his signature. Voted the most marketable athlete on the planet, ahead of Messi and Cristiano Ronaldo, he already boasts more than 10 sponsorship deals that will benefit the club in one way or the other. Neymar’s commercial value is already meteoric, and will only rise after wearing the blaugrana colors. However, removing his arrival from the commercial context and putting it in a pure football perspective, leaves big unanswered questions.

The basic cog in Barcelona’s Total football is the team working as a unit, and finding the perfect equilibrium that enables individuals to showcase their strengths and adequately contribute to the team’s performance. One, two, or three new defenders won’t fix our defensive problems, and signing several quality attackers won’t solve our attacking difficulties. The system in which these individuals will function is the most important thing. If the system if broken then whomever we sign will not change the outcome. Our Total football ensures that individual mistakes are covered by collective efforts such as aggressive pressing.

When one player fails, the unit makes up for his shortcomings and the team triumphs. But when individual errors tend to appear more, that means that the collective team effort is not up to covering these individual mistakes, thus condemning the team to inevitable failure. To simplify things, Guardiola’s Barcelona managed to win a historical number of titles with almost the same defense we have now. He even won the champions league final with a make-shift defense, that’s simply because individual shortcomings, no matter who is absent, were always covered by collective efforts. Was that the case this season? That said, we should carefully identify and acknowledge that signings alone will not solve our problems, our system should be put under close scrutiny in order to rectify previous blunders.

After all, a broken system not only exposes individuals, it also has deadly symptoms, such as the-now-infamous “Messidependencia”. Tito should go back to the basics of Total football and do his homework before determining who should be signed before big questions start to haunt him, questions such as: does Neymar fit into the system?

In terms of style, the closest thing to a Neymar is a Ronaldinho. And when Ronaldinho arrived at Barcelona, he was tested for two seasons in the French league. Neymar is arriving as a raw talent, fresh from the South American market. His exquisite talent is not a guarantee for success. Marketing aside, many factors will shape his career at Barcelona, and only time will tell whether he was a justifiable acquisition.