According to a report from Football Italia, Eintracht Frankfurt’s Jetro Willems has confirmed that Newcastle United and AS Roma are interested in signing him in the summer.

The Dutchman has had an impressive campaign in the Bundesliga this season but the report reveals that he is unhappy.

Filip Kostic’s arrival has pushed Willems down the pecking order at Frankfurt, who have had an incredible campaign in Germany and in the Europa League.

The Dutchman’s playing time has drastically decreased due to Kostic’s performances in the left wing-back role and Newcastle should lure him away from Frankfurt with a promise of regular playing time.

The Magpies are in need of a new left-back after being forced to play Matt Ritchie in that position for most parts of the season. Paul Dummett’s injury early on opened up the role for the former Bournemouth man, who has excelled there despite it not being his natural position. 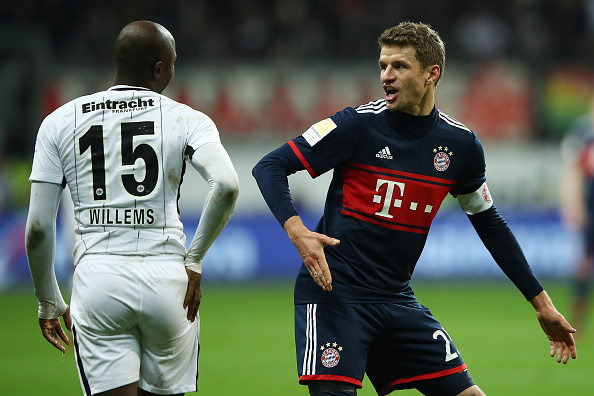 Antonio Barreca’s loan move from Monaco hasn’t produced the goods and a permanent move for him is highly unlikely. A new left-back has to be a priority in the summer and Jetro Willems would be a fantastic addition in the summer.

Willems has managed to play just over 700 minutes in the Bundesliga this season. Despite being a natural left-back, Willems has often been pushed into the centre of the park and the Dutchman has surprisingly excelled there.

His physicality in the centre of the park allows him to be a defensive shield to the backline, while his immense technical ability on the ball allows him to dictate the game from the middle.

Willems possesses a fantastic range of passing but his sudden burst of acceleration to get away from an opponent makes him a perfect fit in the midfield.

In his natural position, Willems is solid. The balance he produces his side between attack and defence is brilliant but his prowess in attack will give Newcastle a lot of joy in their forward runs next season.

Willems is a solid tackler and is rarely ever caught out of his position. His reactions are exceptional and that combined with his excellent ability to anticipate danger makes him a brilliant defender for any side.

Newcastle United will have a solid player in their squad if they manage to sign Jetro Willems in the summer.

The Dutchman’s experience, quality and physicality make him a perfect fit in the Premier League and Newcastle will be the ideal place to restart his career next season.