Settling into the Premier League immediately and hitting the ground running upon arriving the top flight isn’t a very common phenomenon you often get to associate with new EPL arrivals.

And this just doesn’t apply to outfield players alone, even goalies have struggled to adapt to the demands of the league at times. De Gea had difficulties settling into life at Old Trafford when he made the switch from Vicente Calderon seasons ago.

This trouble was highlighted again this weekend when Manchester City goalie Claudio Bravo, and his Liverpool counterpart Loris Karius, both summer signings of their respective clubs, performed below expectations at their duty posts, costing their clubs 3 points in the process.

Despite both clubs taking the leads by half-time, they still eventually lost and their goalies should take a large chunk of the blame. With such woeful outings, and given how they haven’t looked utterly convincing thus far, does this means Bravo and Karius are really as poor as they have seemed?

The Chilean was brought in as a direct replacement for Joe Hart in the close-season, with Pep preferring him to the England international due to his ball-playing abilities.

Indeed, the former Barcelona custodian has done exactly what he was mainly recruited to do. Contribute to the play and start its buildup from the back. Thus far, the 33-year-old has an impressive 73.3% pass accuracy.

However, in terms of really keeping the goals out, Bravo hasn’t been impressive just enough. On Saturday against Chelsea, having remained out of the line with City swarming around the Blues’ half, the counter attack leading to Willian’s goal caught him aware, as he hadn’t gotten back well into the proper position to have a chance of saving the strike.

Even the fact that he has saved 66.7% of shots on target directed at him, doesn’t help hide that something might actually be wrong somewhere with Bravo’s goalkeeping (emphasis on the word “goal”). 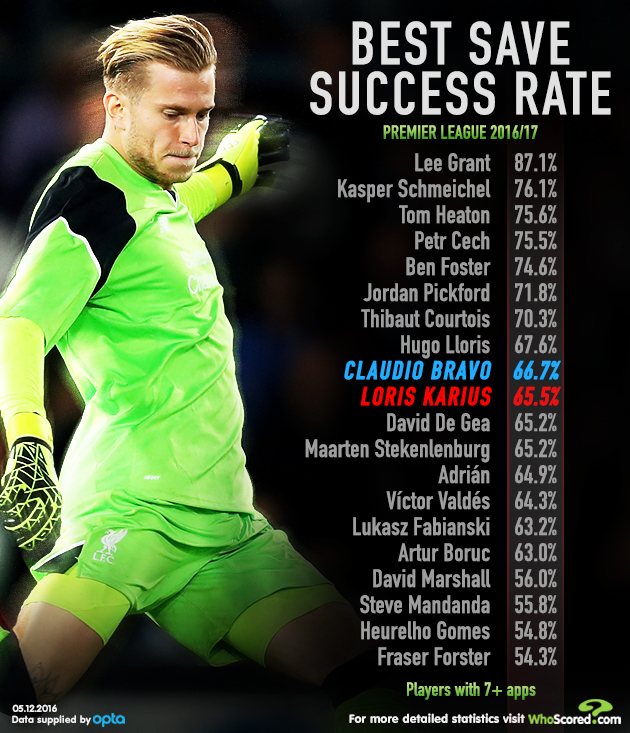 Manchester City have faced the 2nd-lowest shots per game (8.6) this season, yet they have managed to ship 15 goals. This means for every 8 shots Guardiola’s defence has come against, they have conceded a goal.

Liverpool also have a very similar problem at the back. They are the lowest for shots faced per game (7.9) thus far, and they have somehow let in a goal for every 6.2 shots faced as a result of conceding 18 goals in 14 games.

Are these 2 goalies indeed that poor? Or are there any explanations to this? And no, it’s not about their defenders alone. Karius’ mistakes allowed Liverpool concede The Cherries’ last 2 goals on Saturday when he should have better. And the German’s save rate is 65.5% – the 10th best.

The young Germany international was seen as an upgrade on Mignolet, with his ability to help the team press further high on the pitch, amongst other abilities the reason Klopp went for his signature.

However, the numbers – which never lie, prove Karius is far from better than the Belgian, and that Bravo is probably even worse in terms of making the crucial saves than Hart. The 2 former number 1’s might have been error-prone to a fault, but they weren’t this poor.

Karius and Bravo might end up doing the exact opposite of what they were recruited for in the long-run. They have cost their sides 3 points already, and if this continues, City and Liverpool are very likely to miss out on the title because of these 2.