Billy Sharp earned Sheffield United a point at the Portman Road as the Blades were held 1-1 by Ipswich Town on Saturday.

Ellis Harrison put Ipswich ahead in the 37th-minute before Billy Sharp sealed a 1-1 draw for the visitors shortly after half-time.

Chris Wilder named an unchanged side from the 2-1 loss at home to West Brom a week ago. And the first chance fell to Blades skipper Billy Sharp, who rifled a shot in the second minute only to be kept out by goalkeeper Dean Gerken. From Oliver Norwood’s resultant corner, the ball kindly fell to John Egan in the box but the central defender’s shot was blocked.

Six minutes later, some good build-up down the left involving David McGoldrick and Enda Stevens resulted in a cross which was narrowly headed over the bar by Sharp, who should have at least hit the target from that distance. Sheffield United kept up the pressure and also had the ball in the net through Sharp following a free-kick by Oliver Norwood but the skipper was ruled offside. 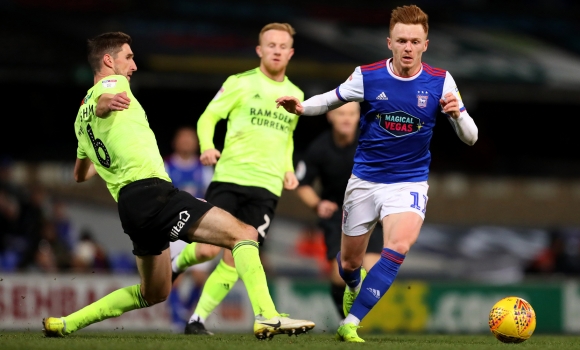 John Fleck struck a low shot through to Gerken in the 20th minute and at the other end, Ipswich registered their first shot on goal, an Ellis Harrison header from a Spence cross which was hit straight at goalkeeper Dean Henderson.

And against the run of play, Ipswich took the lead in the 39th minute. Sheffield United gave the ball away cheaply on the Ipswich left and Sears fed Harrison outside the penalty area. He surged forward with the ball inside the box where his sweet right-footed shot took a slight deflection off John Egan and past Henderson into the back of the net.

But the Blues’ lead would last only two minutes into the second half. Norwood whipped in a delicious cross from the right which beat Chambers. Sharp buried the header home from close range. After the equaliser, Wilder’s team dominated the game but failed to find the crucial second goal that could have given them all three points.

Disappointed with the 1-1 draw with basement boys Ipswich, here’s how the Sheffield United fans reacted.

Got to be winning thes lads. Wheres the passion

Needed to win that 😕

Not close to being acceptable. Multiple missed chances yet again and against the bottom team. BUY A STRIKER

Ok yet again we pass more than the opposition we have 2/3rds of the possession and struggle to get a win second half performance patchy ? #sufc #twitterblades