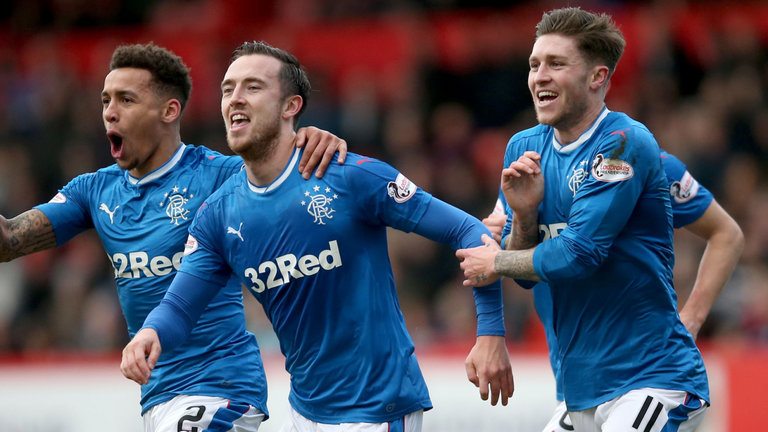 After succumbing to a crushing defeat at the hands of rivals Celtic last weekend, Rangers will look to bounce back when they take on Kilmarnock at the Ibrox Stadium on Saturday.

The Gers were thrashed 5-0 by Celtic and the result left the Light Blues 3 points behind 2nd-placed Aberdeen in the table. Following the result, the Light Blues decided to sack Graeme Murty from the managerial post amidst strong rumours that Liverpool legend Steven Gerrard will be taking over next season.

Assistant managers Jonatan Johansson and Jimmy Nicholl will be assuming duties for Saturday’s game. Here’s how they could set the team out against the Killies this weekend.

With first-choice goalkeeper Wes Foderingham still sidelined with an injury, Jak Alnwick should continue between the sticks for the Light Blues.

The Englishman has vastly improved in comparison to the previous season but his displays of late have been dour. Needs to bounce back this weekend.

The young defender has shown great promise in what has been a breakthrough campaign. Has had a few difficult outings of late and will be keen on finishing off the season on a high.

With both Bruno Alves and David Bates sidelined, on-loan Norwich City defender Russell Martin is once again in line to partner McCrorie at the back.

The 26-year-old midfielder filled in at left-back for the injured Declan John last week against Celtic and is likely to do so once again on Saturday.

The 21-year-old Scottish youth international has faded after a bright start to life at Ibrox. Needs to be backed up as he possesses plenty of quality and potential.

The former Norwich City midfielder is a key member of the side with his ability to impact the game at both ends of the pitch.

The player with most number of assists in the Scottish Premiership this season, Portuguese winger Daniel Candeias will be tasked with pumping crosses into the box for his attacking partners to feed on.

The 24-year-old Englishman has been quite disappointing in recent weeks with injuries and loss of form hurting him. Will want to bounce back with strong displays in the final few games.

The Brighton & Hove Albion winger has been a fine addition to the side since joining the club on loan in January. On current form, he should be one of the first names on the team sheet.

Another player on loan with the Light Blues, the Nottingham Forest forward has done quite well in recent weeks, enough to keep Alfredo Morelos out of the starting line-up.