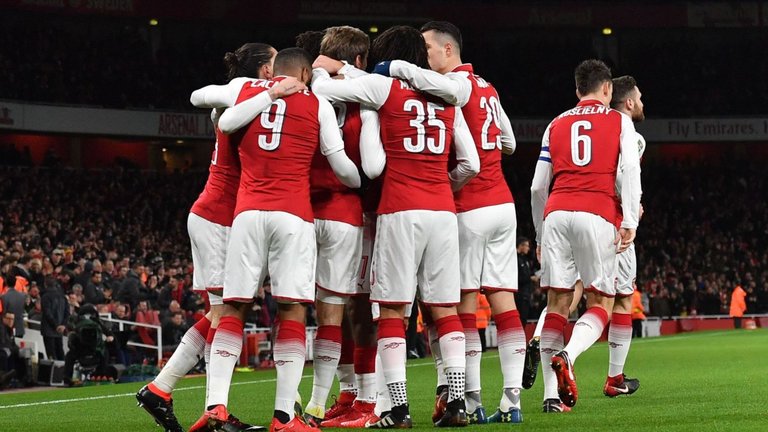 Predicted Arsenal Lineup To Face Everton In The Premier League

All eyes will be on Pierre-Emerick Aubameyang and Henrikh Mkhitaryan when Arsenal welcome Everton to the Emirates. Aubameyang was bought on the deadline day, a few days after his former Dortmund teammate swapped Manchester United for Arsenal.

The Gunners however, will come into this fixture knowing that it is a must-win situation, after the result against bottom club Swansea City. The Gunners are currently 6th in the table, 6 points behind 5th placed Spurs and 8 behind the defending champions.

Jack Wilshere will mostly miss this fixture due to illness. Danny Welbeck remains sidelined with a hip problem. Santi Cazorla remains a long-term absentee due to Achilles injury. Aubameyang is ill and is a doubt for the game.

Wenger said that the ‘LMAO’ attack is not yet a certain formation and that he would still figure the best frontmen out. However, one could expect Mkhitaryan to start against the Toffees. In his press conference, the French mastermind hinted that he would field a back four formation.

The veteran, Petr Cech will protect the goal for the Gunners. After a disastrous outing against Swansea, Cech will be hoping to get back to form.

The pace, quality, narrow close range attacking, dribbling and outstanding delivery of Hector Bellerin should be seen at right-back.

Koscielny has come back with a bang and will lead the side from the front. He needs to hold his team’s defence and set it up properly to avoid errors.

A good tackler, sticks to his basics and is a real monster in the box. He will accompany Koscielny.

He comes into this game in rich vein of form and will hope to take his side home by continuing it.

A lot of questions have been raised against the midfielders of Arsenal but Xhaka needs to shut his critics and produce what he’s known for.

He should play in an advanced role and be given the liberty to tackle freely and get into the opposition box.

Wenger said Özil needs to lead by example and the German will be glad to have the creativity of Mkhitaryan alongside him. He should play down the right.

He is in line for his first PL start for the Gunners. The Armenian could play behind the striker, his best-known position.

Iwobi is direct, carries the ball well and should play in the left-wing.

Given that new signing Aubameyang is a doubt for the game, Wenger should stick with the misfiring but talented Lacazette. The Frenchman will now be eager to perform well after the arrival of Pierre-Emerick Aubameyang.