With 2012 coming to an end, every club will be looking for a win to end the year on a high note. And when Manchester United host West Bromwich at Old Trafford later today, we could count on some definite action between the two clubs. Both teams have registered wins in their previous matches and will be looking to snatch up those 3 vital points before the New Year. The match is sure to be a New Year’s eve treat to fans!

The Red Devils will look to extend their dominating lead to 10 points after a narrow 4-3 win against the Magpies last week. Thanks to a late goal by Javier Hernandez, United were able to edge their way to a win. Lucky enough though, their defense seems to be the most vulnerable, being unable to match the opponent’s forward play. With as many as 10 goals in the previous 5 matches finding the United net, Sir Alex will look to bring in Nemanja Vidic to the team. His presence should surely boost the defense, increasing chances of a clean sheet. Fatigue is also a key factor this week as many of the players are struggling to keep up for the entire 90 mins. We could expect squad rotation with Carrick and Young being rested for the New Year’s day match against Wigan Athletic. Sir Alex will hopefully see Danny Welbeck and Shinji Kagawa back in the squad depending on how the training session goes. 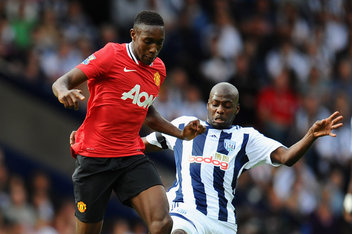 As for the Baggies, inconsistency has been the key problem. They have somewhat found their winning streak, with struggling 2-1 wins over Norwich and Queens Park Rangers in their previous matches. Steve Clarke had been receiving praise for his manager role earlier this season, when West Brom was placed 4th in the table. After 3 losses and just 2 wins in their last 6 matches, they have dropped to the 6th position below Everton and Tottenham.  Clarke will be counting on striker Shane Long, who hasn’t found the net in the past 4 matches.

Manchester United – Wayne Rooney has been sidelined for 2 to 3 weeks, sustaining a knee injury during training last week. Kagawa and Nani are yet to receive the green signal! As for Rafael however, he will continue to remain on the bench this week.

West Bromwich – Mulumbu and Jonas Olsson are to play depending on late fit test. As for Steven Reid, he will remain on the bench, with a shin injury to his name.

Manchester United seem favorites to win the match against West Brom with a good streak going into the game. Supposing West Brom get the upper hand early in the game, we could see an intense comeback from United, which has proven to be their biggest asset this season. Unless Long finds his striking form, West Brom are a minor threat to United.