George best, Ryan Giggs, Christiano Ronaldo, David Beckham, Billy Meredith. Manchester United’s history is filled with fast, attacking wing play, something first started by Sir Matt Busby, and then defined as part of the clubs great history by the great Sir Alex Ferguson. So how do the current crop of wingers line up against the greats of the past? Could it be that the days of quick players flying down the wing with the ball at their feet at old Trafford are over?

What can you possibly say about this man that hasn’t already been said? The most decorated British player in the history of the game and the leading appearance maker for Manchester United of all time. The sight of Ryan picking the ball up and running down the wing has terrified opposition defences and delighted the Old Trafford faithful for over 20 years, but he has taken up a more central role recently. Even the great welsh winger himself can’t hold back Father Time, and although last season he did show that he can still play on the wing, his most effective position is now through the middle, and he cannot be relied upon to start two or three games per week and run the show down the left like he used to. Right backs across the country will breathe a sigh of relief when this great man finally hangs up his boots, but even now his influence is waning. Aging.

Quite possibly the single most frustrating player I have ever seen pull on the red shirt of United. In one game the Portugal international can terrorise defences with his pace, his direct running, the ability to play on either wing, with either foot, inside or outside, crossing or shooting, and then in the next game nothing he tries will come off and he looks tame and out of his depth. On his day there is little doubt that Nani is one of the most naturally talented players in the world, but year after year of inconsistent performances has frustrated United fans, with questions now being raised about his future at the club. If he can find his form and keep it for any length of time, then United have a real world beating winger who can rival the greats of the past, but if he can’t, then he is in for another disappointing season. Inconsistent.

The classic right winger. Quick, strong, direct, very right footed, and a great crosser of the ball, Valencia’s growing partnership with the increasingly impressive Rafael down Man United’s right wing has been one of the shining lights of the team over the last few years. Even after the horrific ankle injury that blighted his second season with the team, the winger swept the end of season awards for the 2011/2012 season, and as a result, he was given the legendary number 7 shirt at the start of the 2012/13 season. However the pressure of the shirt seemed to weigh heavily on the young man’s shoulders, and his form dipped slightly over the season, leading to a poor season by his high standards. But a return to form at the end of the season promises much for next year. Bad Form. 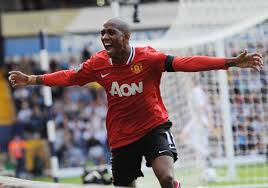 Another of United’s wingers that suffered a poor season during 2012/13. Having been so outstanding during his maiden season at United, Young demonstrated his pace, power, direct style, stunning right foot and excellent dead ball delivery, showing why Ferguson paid a premium price for the ex-villa man. The England Winger’s best performance arguably came against Arsenal in the early season 8-2 demolition at Old Trafford, again showing Young’s capacity to perform in the big games. However, injuries and a loss of form have led to many questions about Young’s ability to cut it at this level, being cited as one-dimensional, due to his propensity to cut onside onto his right foot a lot. Undoubtedly a very talented winger, Young just needs to re-find that consistency and form that earned him such acclaim in his first season at united. Injury Prone.

Put simply, Zaha is one of the most exciting prospects in the country right now, if not the world. His performances in the Championship with Crystal Palace earning him an England place, and the Championship Player of the Year award. Not bad for a 21 year old who has only been playing professionally for three years. Tipped by many to be the next big English star, the only question hanging over the young man’s head is whether he can come into the biggest team in England and seal the first team place he needs. If he can then we could be looking at the next legendary winger at the Theatre of Dreams. But for now, we must keep our feet on the ground and watch his progress with interest. Unproven.

So there we go, the current crop of wingers that Moyes has inherited. Lacking the real star man of previous years, and opening up the possibility that United’s best formation may not include any real wingers at all, instead favouring the extra men through the middle with Kagawa playing off a couple of striker and a three man central midfield, or one man up front, two holding midfielders, and Zaha/Young, Kagawa and Rooney playing as attacking midfielders. But the potential is there, and provided one of two can find and keep their best form, the art of wing play may not be dead yet, and in Zaha, we appear to have a natural heir to the crown of the wing wizard.