Manchester United travel to the Netherlands to face AZ Alkmaar on Thursday looking to make it two wins in as many games in the Europa League.

Ole Gunnar Solskjaer’s side will be in action at the Kyocera Stadium in The Hague, which is 70 miles away from Alkmaar. The game will be played on a plastic pitch as the roof at AZ Alkmaar’s usual ground, the AFAS Stadium, collapsed in August.

The Red Devils dropped points in the Premier League once again, with Solskjaer’s side drawing 1-1 with Arsenal at Old Trafford on Monday. The Norwegian will expect a better performance from his boys and, of course, a positive result on Thursday.

Anthony Martial, who has missed the last five Manchester United games with a hamstring injury, including the 1-1 draw with Arsenal, will not return against AZ Alkmaar. Aaron Wan-Bissaka was absent against Arsenal due to illness and remains a doubt for Thursday’s game.

Phil Jones is also set to miss the Europa League clash after he picked up a knock in last week’s Carabao Cup shoot-out victory over Rochdale. However, Diogo Dalot and Angel Gomes could return after the pair were both unavailable for the last two games due to injury.

Romero is United’s goalkeeper for cup competitions and will start against AZ Alkmaar.

Likely to be fit for Thursday’s game, Dalot could start at right-back ahead of Wan-Bissaka.

Strong in the air and quick through the ground, Tuanzebe deserves to start in central defence after a couple of assured performances.

Lindelof has looked shaky at the back this season. However, Solskjaer could opt for the Swede to partner Tuanzebe in central defence.

Despite Shaw having returned to training, Rojo, who did well against Astana and Rochdale, could start at left-back in the Netherlands.

The Serbian should start in front of the defence to provide some cover.

The Brazilian has shown flashes of his quality but needs a run of games to cement his place in the team. He’s likely to partner Matic in central midfield.

Chong has been disappointed in the couple of games he has played in cup competitions. It’s time he starts making most of the opportunities thrown at him.

The experienced Mata will provide some much-needed creativity to the side that is lacking confidence and goals at the moment.

Pereira could keep his place in the team after a decent performance against Arsenal on Monday.

With Martial ruled out and Rashford low on confidence, Greenwood deserves to start. The teenager has already shown his quality and must lead United’s attack against Alkmaar. 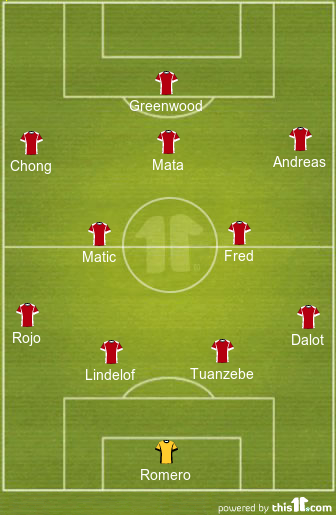