After what was a rather pleasing performance, that didn’t yield the desired result against Manchester City, the Red Devils turn their attention to the Capital One Cup where they come face to face with Championship side and Premier League hopefuls Middlesbrough on Wednesday evening.

Middlesbrough will travel to Old Trafford, with the confidence of having beaten rivals City last season in the FA Cup at the Etihad and will hope that they can pull off a similar upset come Wednesday.

The Reds currently lie 4th in the Premier League, behind Arsenal and City, but ahead of the trio of Spurs, Liverpool and Chelsea. The way they attacked against City was encouraging as they kept possession very well but were denied by the dogged City defending and once by the bar. They drew 1-1 at the Khimki Stadium against CSKA Moscow too, wherein Anthony Martial made up for his handball by scoring a perfectly executed diving header.

As far as Middlesbrough as concerned, Aitor Karanka’s men lie 4th in the Championship table and are just four points behind unbeaten leaders Brighton. After being beaten 2-0 at Madjeski Stadium 3 weeks ago, ‘Boro have won two games on the trot, overcoming both Wolves and Leeds with scorelines of 3-1 and 3-0 respectively. They came back from a goal down to score thrice against Wolves, in which both Stewart Downing and Diego Fabbrini shone. 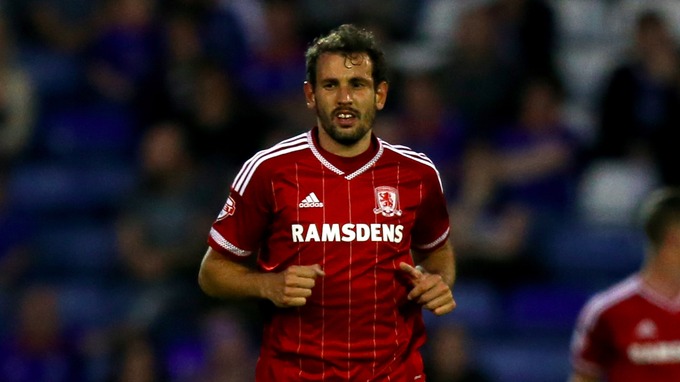 ‘Boro’s Christian Stuani is someone the Teessiders have relied on when it comes to goals in the Cup, as the Uruguayan has notched up a tally of four goals so far. Diego Fabbrini has been among the goals too, although in the league as the 25 year old Italian has scored four times and assisting twice. Otherwise, Middlesbrough are blessed with players having a good amount of Premier League experience such as Grant Leadbitter and former Liverpool man Steward Downing, who have been pivotal to ‘Boro’s season so far.

When it comes to United, Andreas Pereira may end up playing a handy role as the young Brazilian scored a superb free kick against Ipswich in the previous round. Jesse Lingard has looked bright ever since coming into the first team fray. And as always, Middlesbrough would have to keep a close eye on Anthony Martial, who has enjoyed a brilliant start to his United career.

Both of these sides last met in the 2008-09 season when ‘Boro were in the Premier League, but United won all three games, including a League Cup clash.

Ryan Giggs and Park Ji Sung had scored a goal each at Riverside while a Dimitar Berbatov strike had handed the Red Devils a 1-0 win at Old Trafford.

In the League Cup clash, Cristiano Ronaldo, Nani and Giggs scored as United advanced into the third round with a comfortable 3-1 win.

If United play a slightly young side, which resembles the one proposed above, Middlesbrough may well fancy their chances a bit, but even in that case, Louis van Gaal’s men would be strong enough to overcome Aitor Karanka’s men.