Manchester United will be looking to return to winning ways when they welcome Norwich City to Old Trafford in the Premier League on Saturday afternoon.

Ole Gunnar Solskjaer’s side are still 5th in the Premier League table, though, just five points off fourth-placed Chelsea heading into this weekend’s fixtures.

The Red Devils are without a victory in their last three matches in all competitions, losing to Arsenal and Manchester City in the Premier League and EFL Cup respectively, in addition to playing out a goalless draw with Wolves in the FA Cup.

After the EFL Cup semi-final first-leg defeat to Manchester City on Tuesday, Solskjaer will expect a response from his boys.

Manchester United will still be without Harry Maguire through injury against Norwich after the defender sat out their 3-1 loss to Manchester City due to a knock picked up against Wolves in the FA Cup.

But Luke Shaw, who missed Tuesday’s game due to illness, could return to the squad.

De Gea has endured another disappointing season with the Red Devils. His aim on Saturday will be to keep a clean sheet against the basement club.

The right-back has become one of United’s key players under Solskjaer. He is an undoubted starter against the Canaries.

Lindelof was poor in United’s defeat to City in the EFL Cup on Tuesday. With Maguire injured, the Swede will have to shoulder the responsibility of leading the backline.

Jones deputised in defence in the absence of Maguire and endured a torrid time against City’s attackers. He’ll need to be steady at the back if the Red Devils are to keep a clean sheet at the weekend.

Williams has impressed with his attacking displays and should keep his place at left-back.

Matic was brought on in the second half against City in the EFL Cup semi-final first leg and changed the game, giving United more control. Since returning from injury, he has re-established himself as a valuable player and must start against Norwich.

With McTominay and Pogba injured, Fred has had to shoulder the responsibility of initiating attacks from the midfield. The Brazilian is likely to partner Matic in central midfield.

Greenwood is an exceptionally talented player, who is a natural goalscorer. The teenager can play in different positions across the front-line but could be stationed on the right.

Pereira struggled to cope with City’s midfielders and his evening turned from bad to worse after scoring an own goal. However, the 24-year-old will be eager to respond with a strong performance at the weekend.

Solskjaer could freshen up things a bit by resting Rashford and using James down the left flank. James’ terrifying pace and direct approach could cause the Norwich defenders problems at Old Trafford.

Martial came on for the last 10 minutes against City in the EFL Cup but he should be fully fit by Saturday to start against Daniel Farke’s boys. 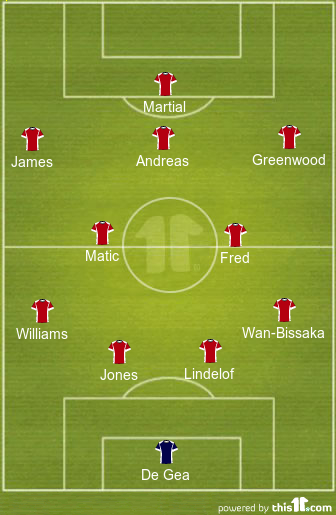