Ole Gunnar Solskjaer’s side beat Colchester 3-0 in the quarterfinals of the competition. The Red Devils have been inconsistent throughout the season and will come into this game of the back of a 0-0 draw with Wolves in the FA Cup third round.

Manchester City, who defeated Oxford United in the last round, warmed up for this contest with a 4-1 victory over Port Vale in the FA Cup third round on Saturday evening.

Solskjaer couldn’t offer a detailed update on the players in his pre-match press conference but said that he will give them as long as possible to recover. (h/t The Daily Mail)

Romero has been excellent whenever called upon and he should start in goal on Tuesday.

The right-back has become one of United’s key players under Solskjaer. He is a certainty to start against City.

The Swede was excellent against Wolves in the FA Cup. He is one of United’s first-choice defenders and should keep his place in the team.

There’s every chance of Maguire recovering fully from his slight injury and partnering Lindelof at the back. If he’s deemed fit to play, the England international will have to be at the top of his game to keep the City attackers at bay.

Williams performed really well against Wolves in the FA Cup, keeping the in-form Adama Traore at bay for the majority of the game. With Shaw touch and go, Williams should retain his place at left-back.

With Pogba and McTominay injured, Matic is expected to retain his place in the team. The Serb will have to be at his best to help United get a positive result in the first leg.

The Brazilian seems to have regained his lost form and looks confident on the ball now. He’s a certainty to partner Matic at the heart of United’s midfield.

James’ form has dipped in the last few games but he has time and again proven to be a headache for opposition defenders. The Welshman should start on the right flank.

Pereira has looked bright lately, with the talented midfielder showing his quality with the ball as well. He should start in the No.10 role in the Manchester derby.

Rashford came as a substitute in the 0-0 draw with Wolves in the FA Cup but he is likely to start against Pep Guardiola’s men on Tuesday. The in-form forward will be expected to deliver the goods at Old Trafford.

Martial missed the Wolves game due to illness but there’s a chance of him recovering ahead of the game. Should he recover, the Frenchman will lead United’s attack. 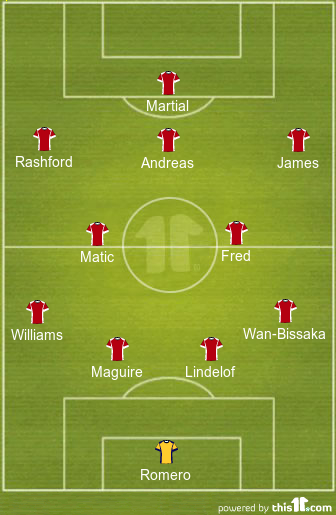