Ole Gunnar Solskjaer’s Manchester United travel to Anfield on Sunday in a bid to halt the Liverpool juggernaut.

The Red Devils are the only club to have taken points off runaway leaders Liverpool in the Premier League this season and they will try and do so again at the weekend.

Solskjaer’s side have been inconsistent throughout the season and just edged Wolves at Old Trafford to advance into the fourth round of FA Cup.

Liverpool, meanwhile, have 61 points from a possible 63 and are on a club-record 38-match unbeaten run. As a result, they’ll enter the game as overwhelming favourites at their own turf.

Manchester United suffered a big blow when substitute Marcus Rashford was forced off against Wolves with a knock. Hence, he remains doubtful for the trip to Anfield.

Eric Bailly could return to the United squad for the first time all season, having recovered from a long-term knee injury sustained in the pre-season win over Tottenham Hotspur in Shanghai in July.

De Gea hasn’t had a great season in goal but he’ll need to be at his best to keep a clean sheet at Anfield.

Strong in the tackle and a good reader of the game, Wan-Bissaka will have an uphill task of keeping the in-form Mane at bay.

Lindelof had a solid game against Wolves as he helped Manchester United keep a clean sheet on Wednesday. The Swede will retain his place at the back.

One of the first names on the team sheet, Maguire needs to be better than what he’s shown at United so far. He’ll partner Lindelof at the back.

Williams has nailed down his position at left-back with a string of impressive displays. He’s an undoubted starter against the league leaders.

Injuries to McTominay and Pogba have seen Matic get opportunities of late and the defensive midfielder has grabbed it with both hands. The Serb is a certainty to start at Anfield.

Fred has become a crucial player at the heart of United’s midfield. Tenacious and energetic, the Brazilian will have to be at the top of his game to nullify the Reds’ threat.

Greenwood had a poor game against Wolves in the FA Cup on Wednesday and was substituted in the second half. Otherwise, the teenager has been excellent in his breakthrough season at the club and deserves to keep his place on the right flank.

Mata has been United’s best player over the last two games, bagging two assists against Norwich in the Premier League before scoring the winner against Wolves in the FA Cup. The Spaniard should start in the number 10 role.

With Rashford a big doubt for Sunday, James is likely to keep his place on the left wing. The Welshman could cause a lot of problems for the Liverpool defenders with his blistering pace and movement.

Martial assisted Mata’s winner against Wolves in the FA Cup. The Frenchman is likely to continue leading the United attack. 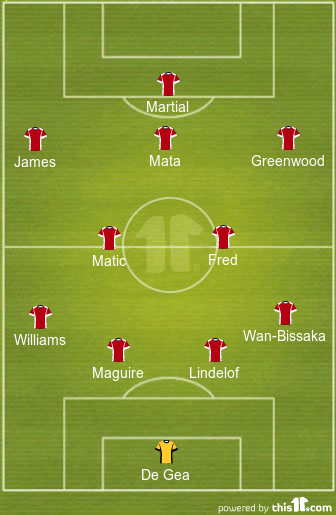