At a time when Manchester United are struggling to keep defenders fit, Chris Smalling effectively gifted Manchester City the game after two moments of sheer madness saw the defender disappear for an early shower in the first half. Manchester United gave a great account of themselves in the next 52 minutes as Louis van Gaal’s side displayed character to rally in the second half after the in-form Sergio Aguero smashed his 12th goal of the season to send City into the lead.

Here are the Manchester United player ratings for what was an action packed Manchester derby.

The Spaniard once again proved to be United’s best player on the day. Sharp reflexes to deny Jesus Navas from close range and to snuff out a clear goal scoring opportunity for Aguero in the first half. Excellent display of goalkeeping.

One needn’t be a football fan to tell Antonio Valencia isn’t a natural right back. Rafael was badly missed as the Ecuadorian was caught hopelessly out of position as City’s goal came from the right flank.

To get two yellows for those offences in a game of this magnitude must be the dumbest act Chris Smalling has done in his entire life. Pure Sunday league stuff when United already find themselves in a defensive crisis. Vindicated many people’s opinion that he never looks like a Manchester United defender.

Was lucky not to have been sent off for a challenge on Yaya Toure in the dying moments of the first half. Unfortunate to end his first Manchester derby with a terrible shoulder injury. Kept Navas quiet for most of the game. A mature display from the 19-year old. Growing into the left back role at Manchester United. Big shoes of Patrice Evra’s to fill, but he’s on his way.

Gave away possession far too cheaply in the first half and passes lacked penetration. Grew into the game in the second half and looked far more comfortable on the ball.

Missed a beautiful chance to equalize when Di Maria played in a gorgeous ball from a set-piece. But otherwise, the Belgian seems to be settling in under Louis van Gaal. Looked bright and industrious throughout the game.

Captain Fantastic! Kept the spirits up even as United were under the cosh for much of the game. Made Kompany look average with a terrific burst through the City backline which eventually set up a Di Maria chance, only for Hart to make a diving save. His composed passing helped United rally late on.

Failed to impose himself on the game before being sacrificed after Smalling’s red card. But looked bright in the early stages down the right flank. 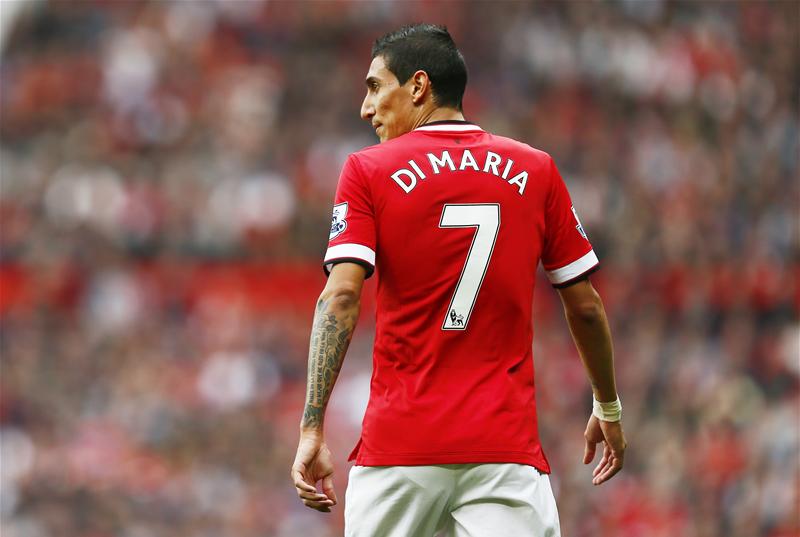 Disappointed at times with his delivery from set-pieces but Di Maria’s running and ability on the ball kept United in the hunt till the very end. Top, top player. One of the very best around.

Lacked the mobility as the focal point of the attack, but did brilliantly well to sniff out an opening with a superb turn and dribble. Denied by Hart as he shot from a tight angle.

Made a couple of last ditch challenges to deny the likes of Aguero and Toure. A nice comeback after injury in his center back role.

Partly at fault for the City goal as he failed to stay with Aguero, but had a composed outing. Denied Dzeko late on as the Bosnian was through on goal.

Needs to get more opportunities. Looks like a fine young talent.