Liverpool have announced that new arrival Naby Keita will be given the No. 8 shirt, which was last worn by former captain and club legend Steven Gerrard.

Gerrard, who left his post as Liverpool’s under-18s manager to take charge of Rangers this summer, presented the No.8 jersey to Keita. The Guinean will officially become a Liverpool player on July 1, joining from Bundesliga side RB Leipzig.

Meanwhile, Premier League champions Manchester City have reportedly agreed to a deal with Napoli for Jorginho worth an initial £43.1m. He is soon expected to sign a five-year deal at the Etihad Stadium and become City’s first signing of the summer.

Here’s a statistical comparison between Naby Keita and Jorginho.

Starting with their playing styles – Jorginho plays from a deep position in midfield and dictates the tempo of the game with his excellent passing; he has often drawn comparisons with Andrea Pirlo and Xavi. The 26-year-old’s confidence on the ball allows those around him the freedom to play more freely.

Due to his playing style and technique, Jorginho became a vital cog of Maurizio Sarri’s exciting Napoli side.

Moving onto Naby Keita, the Guinean proved himself to be a valuable addition to RB Leipzig since joining them from RB Salzburg in the summer of 2016. His versatility is obviously an asset to any team as he can play in a deeper role in midfield as well as a central midfielder. The diminutive Guinean’s biggest strength is his ability on the ball. 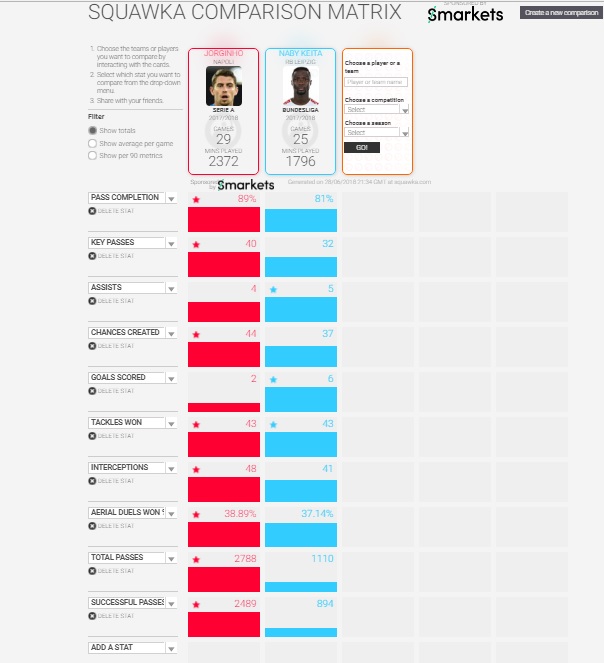 Both Keita and Jorginho won 43 tackles last term and there is not much to differentiate between them when it comes to interceptions; the Italian amassed 48 interceptions in comparison to Keita’s 41. In terms of aerial duels, Jorginho won 38.89% of his aerial challenges, whereas Keita’s diminutive stature allowed him just 37.14% aerial success.

Both Keita and Jorginho will suit Liverpool and Manchester City’s style of play respectively. Keita, a dynamic and energetic midfielder, will thrive in Jurgen Klopp’s full-throttle football, while City’s possession-based style under Pep Guardiola will get the best out of Jorginho.