It’s the first Manchester derby of the Premier League season as Manchester City welcome Manchester United to the Etihad Stadium on Saturday.

The Cityzens eased their way to a 4-1 win against Burnley and are 11 points behind Premier League leaders Liverpool. Goals from Gabriel Jesus, Rodri and Riyad Mahrez handed Pep Guardiola’s side a well-deserved three points at Turf Moor.

However, Manchester City will be wary of their cross-town rivals Manchester United, who despite their up and down season, can cause the hosts a lot of problems at the weekend.

Sergio Aguero has already been ruled out of the Manchester derby with a thigh problem he suffered last month. Ilkay Gundogan will return to the squad after serving a one-game suspension on Tuesday but Oleksandr Zinchenko remains touch and go for Saturday’s contest.

Ederson is City’s undisputed first-choice in goal and should retain his place.

Walker is an experienced player but he’ll have to be at his best to stop United on Saturday.

Otamendi was picked ahead of Stones in central defence against Burnley and he did well. Expect the Argentinean to retain his place.

With an injury to Laporte, Fernandinho has been asked to deputise and he has done well. The Brazilian should partner Otamendi in defence against Manchester United.

Angelino started the game against Burnley on Tuesday but Guardiola could go with the experienced Mendy for the Manchester derby.

Scored a thunderbolt in the 4-1 victory over Burnley. He is a certainty to start on Saturday.

This City team is incomplete without De Bruyne, so the Belgian should start without any competition for this position.

It’ll be a tough choice for Guardiola between Ilkay Gundogan and David Silva for the third midfielder, but the City tactician could go with the German to have more control in the middle of the park against Solskjaer’s United.

Silva is a creative player, and is an asset to the City team. He could get the nod ahead of Mahrez on the right flank.

City’s most consistent player, Sterling will look to cause all kinds of problems to the United defenders. His presence in the team is very crucial as City aim to win the bragging rights at the weekend.

Scored two goals of highest quality against Burnley on Tuesday. In Aguero’s absence, Jesus will lead the attack again. 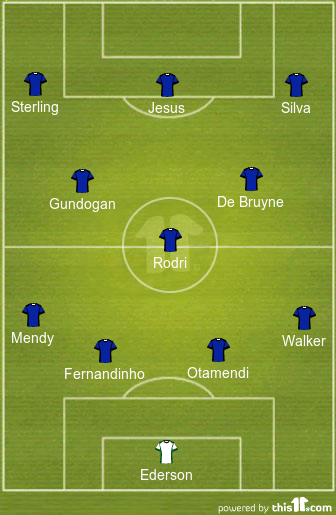