So the final run-in of the season is upon us with both Liverpool and Tottenham having loads to play for. While the latter would be aiming to cement their top-four place in the league, the former are in the title race and every game is virtually a must-win for them.

When these teams take the field on Sunday evening, we can expect a tight encounter littered with expectations. Jurgen Klopp’s Reds are at home, hence, the pressure of winning the game is far more than their opponents.

On the other hand, even though Spurs were in bad form before the international break, they are a quality team who have the capacity to turn up and prove to be a problem for Liverpool.

Without further ado, let us take a look at the combined line-up, featuring players from both teams (players who are fit to play this game and recent form considered as well).

The Brazilian has kept 17 clean sheets this season and gets ahead of Hugo Lloris in this line-up.

Since Trent-Alexander Arnold is a doubt for this game, Trippier gets the nod ahead of his fellow countryman.

The Belgian has been good at the back for Spurs and gets ahead of Joel Matip in the combined line-up.

He walks into any team in Europe right now without a shadow of a doubt.

The Scotsman is arguably the best left-back in the league, hence, he gets the nod ahead of Danny Rose and Ben Davies.

He has been in good form in the past month or so and is a certain starter in defensive midfield. Spurs have Harry Winks but he is a doubt for this weekend.

The Dutchman has been consistently good for the Reds in the midfield and gets into this combined line-up.

His creativity and guile would suit this team which has two defensive-minded midfielders.

The Senegalese international is probably the most in-form player in Europe. It is a no-brainer that he gets into this combined line-up.

The England captain is one of the best strikers in Europe and leads this combined line-up.

Even though the Egyptian hasn’t been in great form, his quality on the right wing helps the team in many ways. Furthermore, Son Heung-min’s form has dipped in the last month, hence, the South Korean doesn’t get in here ahead of Salah. 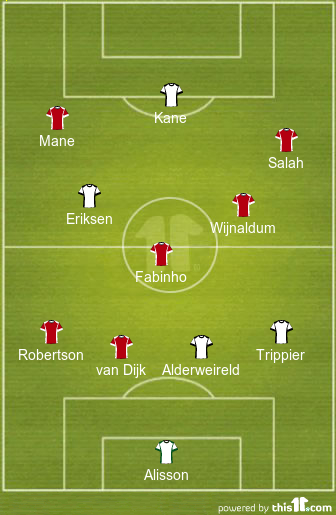