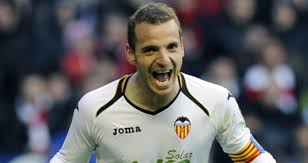 With each passing day Luis Suarez is moving a little closer to his exit from the club. Although it remains to be seen whether his next destination is Arsenal or not, but at this point it looks like his transfer is confirmed.

A mega bid from any club may seal the deal and it is reported that Liverpool are after Valencia ace Roberto Soldado. The 28-year old Spaniard has a typical characteristic that a striker posses and after moving to Valencia from Getafe in 2010, Soldado has netted 81 times in 141appearances for Valencia.

It isn’t the first time that this Spaniard is being linked with the Merseyside club. Along with Tottenham, Liverpool have been in a race to sign this player for quite some time now. Though after missing out on Christian Benteke, Tottenham was eager to grab this centre forward, but a price tag of £26 million has stalled the deal for White Hart Lane officials.

With Suarez’s future on the line, Liverpool will have no other options except to go all out for this Spain forward.

However, Liverpool managing director Ian Ayre has reiterated that the Uruguayan will not be sold this summer, speaking at a press conference in Bangkok during the club’s pre-season tour, told reporters:

“The situation with Luis Suarez remains the same. It’s never been our intention to sell Luis. As has been widely reported in the media we’ve received two separate offers from Arsenal for the player and we’ve rejected those offers.

In other news, Brendan Rodgers have confirmed Napoli’s contact for Pepe Reina. With an below par performances over the past couple of seasons, Reina was a subject of scrutiny at Liverpool and the 30-year-old’s future hit another stumbling block when Simon Mignolet arrived for at Anfield in a move worth £9 million earlier this month.

“It was obviously a difficult decision,” Rodgers told the club’s official website. “From last season, really, as a manager I was led to believe that we were going to get an offer for Pepe that would probably see him leave the club.

“On the football side, we have to protect the team and, at that stage, we started our search for another goalkeeper. As events transpired, that move [for Reina] didn’t happen and it left us with two very good goalkeepers. Both would have been fighting for the No.1 position.

“It’s decided he will go to Napoli and we’ve got two very good goalkeepers still at the football club [Mignolet and Brad Jones].

“As a senior goalkeeper, he needs to be playing. It’s a very important year for him with the World Cup next year. It wouldn’t have served any purpose, both for the club and him personally, if he’d been the one missing out.”

Although Reina was alleged to join Barcelona earlier this year, Victor Valdes’ u-turn meant Barca had to stick with him which ultimately cost Reina’s chances of joining the Camp Nou club. Although, Rodgers expected a permanent solution for the keeper, it is believed that he will access the situation by the end of the next season.