According to a report from the Metro, French Champions Paris Saint-Germain are interested in signing Liverpool’s James Milner in the summer.

The veteran’s £120,000-a-week deal at Anfield will expire next summer and according to the report, Milner hasn’t agreed to an extension with the Reds. PSG have had a disappointing campaign despite winning the Ligue 1 title and are looking to bolster their midfield.

The report reveals that Tuchel is close to signing Ander Herrera from Manchester United on a free transfer and are also keen on Napoli’s Brazilian powerhouse Allan.

However, PSG are also keen on a third midfielder and James Milner is being considered as an option. As strange as it may seem for the Ligue 1 champions to even consider Milner, the move actually makes a ton of sense. 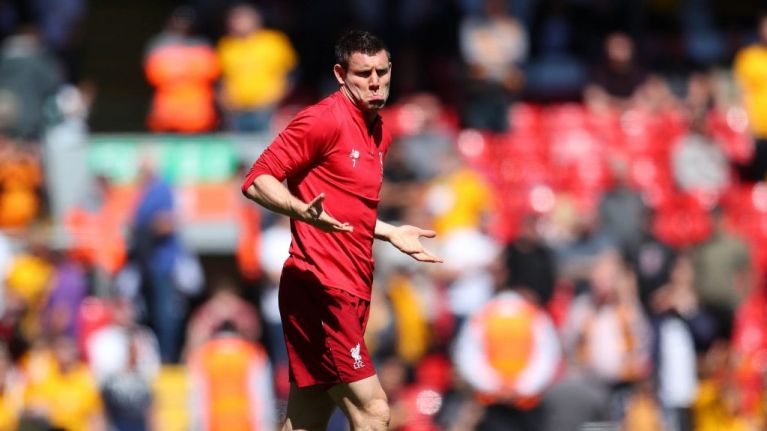 At 33 years of age, Milner has entered the final few years of his career and PSG have been known to sign players of that age group just before retirement, as evident with David Beckham and Gigi Buffon.

The Englishman is vastly experienced and he would do well in a league comparatively inferior in terms of technical ability and physicality when compared to the Premier League.

Milner’s experience in big games will come in handy for the French Champions and he could well help them push on in the Champions League.

Milner’s ability to play in more than one position is a gift that not many players have. The 33-year-old has played in both full-back positions, both wings and across central midfield and he’s been efficient in every one of those positions.

The report reveals that PSG are looking to sell Julian Draxler, Christopher Nkunku and Stanley N’Soki in the summer and Milner can play all of their positions with considerable ease and Tuchel will have a number of options with him next season.

Milner’s chances of regular game time in Liverpool has reduced considerably this season and it could further decrease if the Reds sign another midfielder next season.

Fabinho, Keita and Henderson have established themselves as regulars along with Wijnaldum and with Oxlade-Chamberlain’s return, Liverpool have a loaded midfield.

A move to Paris gives Milner the chance of ending his career on a high with a league title almost a certainty every single season.

The Englishman will also have a new experience, having always played in England and one final payday with the wealthy Parisians will do him a world of good before retirement.

James Milner deserves the best after being an outstanding servant to English football over the last decade. A move to Paris to finish off his career would be a brilliant new experience for him and Liverpool should not stand in his way if he decides to move on in the summer.