Celtic face Airdrieonians in what is the 4th round of the Scottish Cup. The home side handed a start to the recent loan signing from West Brom – the central-striker Oliver Burke. Dedryck Boyata and Filip Benkovic started in the heart of defence while American starlet Timothy Weah will have to do with a place on the bench.

Airdrie are looking for an upset when they travel to Celtic Park to face the top-flight leaders. They began with David Hutton in goal and their forward line was led by centre-forward Leighton McIntosh. Grant Gallagher sat at the base of midfield and would attempt to keep the Celtic attackers at bay as far as possible. 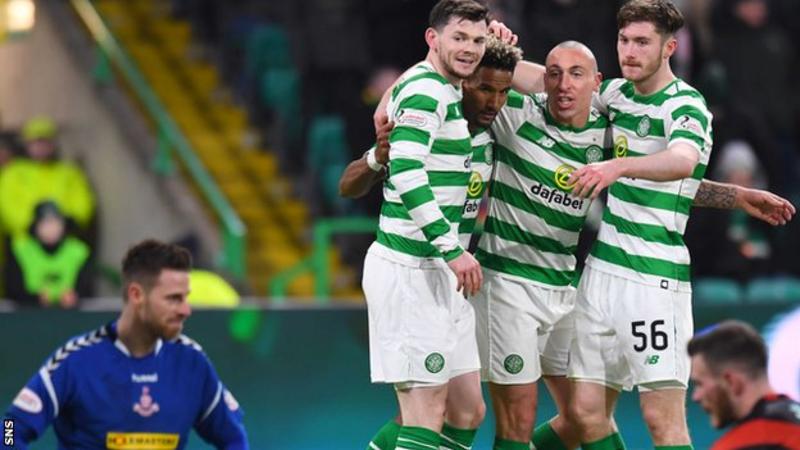 As expected, Celtic began to exert their dominance very early in the match. Within the first 15 mins, they had already managed to create multiple chances. All of the good play finally paid off in the 37th minute when a ball from wide picked out Burke on the edge of the box. He pulled his shot but kept it on target and the keeper could only parry it away before an arriving Scott Sinclair graciously took the gift from the goalkeeper.

The Hoops were able to push for the 2nd until half-time and at the break, they only managed the one goal for all their pressure. The 2nd half began in similar fashion with the 2nd division side unable to get a real grip on the game.

The home side finished with more than 70% possession which meant that in the 56th minute, a Celtic corner was met in the air by a flying Boyata. His downward header bounced off an Airdrie player and fell to Sinclair who got his 2nd gift of the night. Although this game as a contest was long over, the second goal will secure the Celtic victory.

As the half wore on, Rodgers threw on the new signing Timothy Weah who had an instant impact. Dedryck Boyata picked up the ball in midfield a played a threaded pass when split the Airdrie defence wide open. The debutant got a neat flick on the ball and as the ball rolled slowly into the net, Weah celebrated in front of the home fans who have a new hero.

In a game that saw Celtic have 13 shots on target, it was Airdrie’s good fortune that kept it down to just 3 goals. The Hoops are successfully through to the next stage of the Scottish Cup after what was a comfortable victory.

Here’s what some satisfied Celtic fans had to say:

Start Weah on Wednesday or we riot

Job done another step closer to the treble treble.HH

Looks like Rodgers will keep Bain in goals for the Scottish Cup this year. Just like he did for the League Cup.