Leicester City begin their FA Cup campaign on Saturday when they welcome Wigan Athletic at the King Power Stadium.

The Foxes have been doing very well in the Premier League and are currently second in the table. They come into this fixture on the back of a fantastic 3-0 success over Newcastle United, with Ayoze Perez, James Maddison and Hamza Choudhury getting on the scoresheet.

The victory at St. James’ Park would have given Brendan Rodgers’ side a lot of confidence and should be overwhelming favourites in the upcoming tie at the weekend.

Jamie Vardy missed the Newcastle game with a tight calf and remains touch and go for the FA Cup game.

Danny Ward is Leicester’s second-choice goalkeeper and could be handed a start against Wigan.

Justin has done very well in the limited games he has played this term. He is likely to get the nod ahead of Ricardo at right-back.

Morgan came on a substitute in the 3-0 victory over Newcastle but will be handed a start against Wigan on Saturday.

Evans has been fantastic for the Foxes this season and deserves to keep his place in the team.

Chilwell operated in central midfield against Newcastle but should be back to his original position at left-back on Saturday.

An excellent tackler, Ndidi protects the backline and offers the license to the creative players to express themselves freely.

Albrighton hasn’t started many games for Leicester City this term. However, he could get one against the Championship side at the weekend.

Praet is a creative midfielder who’ll look to carve open the Wigan defence with his incisive passing.

Hamza scored a cracking goal in the victory over Newcastle, his first in Leicester colours. That should give the youngster a lot of confidence heading into the FA Cup game.

Perez came back to haunt his former side as he opened the scoring at St. James’ Park. The Spaniard should retain his place in Rodgers’ starting XI.

With Vardy a doubt due to a calf strain, Rodgers must go with Iheanacho up top. The Nigerian has done well in the last few weeks and must aim to repay the manager’s faith. 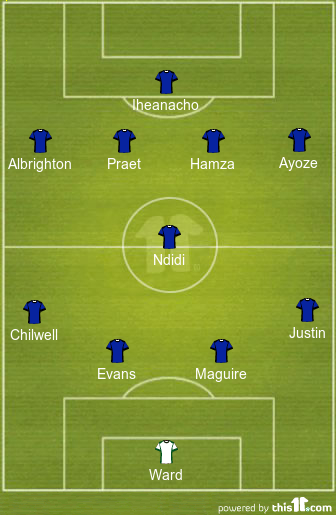