Leeds United travel to the Valley to face Charlton Athletic on Saturday, as they look to retain the top spot in the Championship table.

In their last game against Derby County at Elland Road, the Whites were undone by a stoppage-time equaliser by Chris Martin. Marcelo Bielsa’s side have been inconsistent in the last few weeks, winning just once in the last three games.

The upcoming game is going to be a big test for Leeds United because whilst Charlton are a newly-promoted side, they have started the season brightly, as they sit outside of the play-off places.

Adam Forshaw has a hip problem that is likely to keep him out for Saturday’s game. Tyler Roberts and Luke Ayling have attained full fitness and should be in contention to face Charlton.

Meanwhile, Pablo Hernandez has no injury problem despite being taken off in the second half against Derby County.

Casilla has been reliable in goal this season and deserves to keep his place in the team.

In the absence of Ayling, Dallas has turned in a number of excellent performances at right-back and is expected to start at Charlton as well.

White has been solid at the back for Leeds and is expected to start on Saturday.

A leader at the back, Cooper will have to be at the top of his game to keep Charlton attackers at bay.

With Douglas facing fitness problems, Bielsa has gone with Alioski at left-back and the Macedonian has so far repaid the manager’s faith in him. He is likely to start on Saturday.

Phillips is the beating heart of the team and is an undoubted starter against Lee Bowyer’s side.

Hernandez has blown cold of late for the Whites, failing to influence the game with his creative passing. However, the Spaniard should start on the right flank.

Shackleton started in midfield against Derby and is likely to keep his place in the team again due to Forshaw’s injury.

Klich missed a penalty last weekend against Derby that could have sealed the victory for Leeds. He’ll be desperate to redeem himself at Charlton.

Following a series of poor displays from Harrison, Bielsa could finally hand Costa a start. With his pace, dribbling skills and creative passing, he could be a menace for the Charlton defenders.

Bamford missed a lot of chances against Derby and could be dropped in favour of the exciting Nketiah, who has impressed whenever given chances. 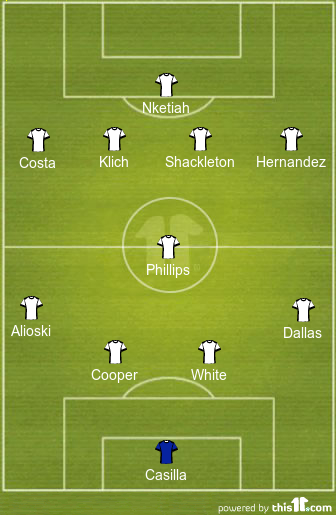