Leeds United travel to Queens Park Rangers on Saturday, hoping to bounce back to winning ways in the Championship.

The Whites lost 2-0 to Sheffield Wednesday last time out that saw them miss an opportunity to leapfrog West Brom at the top of the standings. Marcelo Bielsa’s side have won just once in their last five games and must aim to grab all three points at Loftus Road.

Leeds’ opponents, QPR, are 15th in the table and come into the weekend’s game off the back of a 3-1 defeat to Brentford.

Stuart Dallas was in clear pain in the closing stages of Saturday’s match against Sheffield Wednesday and it remains to be seen whether or not he’ll be fit to play.

Meanwhile, Tyler Roberts and Adam Forshaw still remain out for the Whites.

Casilla is Leeds’ undisputed first-choice in goal and that won’t change on Saturday.

Ayling has nailed down his place at right-back and should retain the position against QPR.

A pillar at the back, White is one of the first names on Bielsa’s team sheet. The on-loan Brighton defender will be a sure-shot starter at Loftus Road.

Cooper has formed a strong partnership alongside White in defence and they’ll look to stop QPR at the weekend.

Douglas started the last game at left-back but was substituted after the break. So, he could drop out at the expense of Alioski against the Londoners.

A good passer of the ball and an ever better tackler, Phillips is one of the most important players for Leeds United. He is a certainty to start at Loftus Road.

Costa has become an important player for the Whites in recent weeks and despite failing to make an impact against Sheffield Wednesday, he will retain his place on the right flank.

Klich is the player who works as a link between the midfield and attack with his tireless running.

Dallas wasn’t comfortable in the latter stages of the last game and even though he wasn’t substituted, Bielsa will not take any risk with him and instead, go with Pablo Hernandez on Saturday. Hernandez has had a start-stop season due to injury problems but now that he’s back, Bielsa will expect a lot from him.

Harrison has improved leaps and bounds this season under Bielsa’s guidance. The on-loan Man City winger should keep his place on the left flank.

Bamford is Bielsa’s first-choice striker and will lead the Whites’ attack against QPR at Loftus Road. 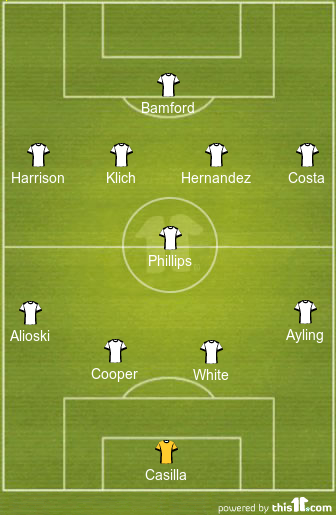