Leeds United welcome Preston to Elland Road on Boxing Day hoping to bounce back to winning ways in the Championship.

The Whites lost 2-1 to Fulham in West London on Saturday, which brought an end to their 11-game unbeaten run. Marcelo Bielsa’s side will need to dust themselves up quickly with Preston due to arrive on Thursday.

Preston, meanwhile, are 5th in the table and come into this contest on the back of a 0-0 draw with Cardiff City.

Pablo Hernandez pulled up in the early exchanges against Fulham and is expected to miss out. Other than Hernandez, Leeds don’t have fresh injury concerns.

A major reason for Leeds’ solid defence, Casilla will aim to keep a clean sheet against Preston on Thursday.

Ayling was very poor against Fulham last weekend. He’ll be eager to produce a strong performance against Preston.

One of Leeds’ best players this season, White, was uncharacteristically poor at Craven Cottage, conceding a cheap penalty. Nonetheless, he will have to be at his best to keep the Preston attackers at bay.

Cooper returned on Saturday after missing three games due to injury. He’ll be hoping to deliver a strong performance to help his team get back to winning ways.

Given his current form, Dallas just cannot be dropped from the starting XI.

One of the first names on the team sheet, Phillips will retain his place in the holding role and look to dictate the tempo of the game.

Costa is a tricky player and could be a thorn for the Preston defenders on Boxing Day.

An energetic player, Klich links the midfield and the attack. He’s a certainty to start in the Whites’ engine room.

With Hernandez expected to miss out, Alioski should replace the Spaniard in the midfield on Thursday.

Harrison has been performing very well of late and will be aiming to continue his rich vein of form against Preston.

Bamford is Bielsa’s first-choice No.9 and should definitely keep his place in the team. 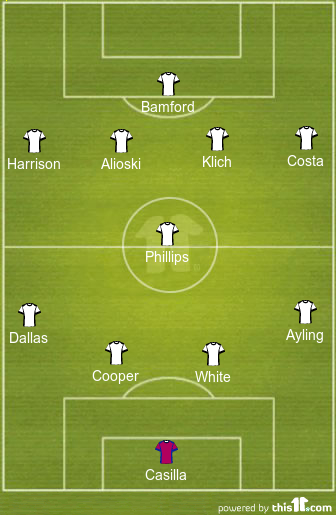