Marcelo Bielsa’s Leeds United travel to the Emirates Stadium to face Arsenal in the FA Cup third round on Monday.

The Whites are aiming for automatic promotion to the Premier League this season and are doing extremely well at the moment. They are at the top of the Championship table at the moment with 52 points from 26 matches, level on points with second-placed West Bromwich Albion.

Pablo Hernandez is out with a hamstring injury and it is unlikely we will see the 34-year-old in action before the end of January. Jamie Shackleton has picked up a fresh muscular injury after recovering from a hamstring problem and will miss out.

Adam Forshaw has still not fully recovered from a hip problem and there’s no set date for his return. Meanwhile, Eddie Nketiah’s loan spell at Leeds United has been cut short, with the forward set to return to Arsenal this month.

Casilla’s form has dipped over the last few games, with the Spaniard making a few mistakes. Nonetheless, he’ll be seen in goal on Monday.

Berardi, known for his versatility, could replace Ayling at right-back against the Gunners.

White has been immense for Leeds United throughout the season and should retain his place in central defence.

Partnering White in central defence should be Cooper, who has done well since returning from injury.

Douglas came on as a substitute in the 1-1 draw with West Brom last time out. He did well and could be picked ahead of Alioski on Monday.

Phillips is crucial to how the Whites operate under Bielsa. The Englishman will be tasked with cutting out Arsenal’s attacks and help Leeds in transition.

Costa is a tricky player and could be a thorn for the Birmingham defenders on Sunday.

Gotts has long been considered as one of the most exciting prospects at the club. He is a versatile player and could start in midfield.

Dallas has been excellent for the Whites of late. He must keep his place in the midfield.

Roberts has played as a striker for Leeds before, but he has been used in a deeper role by Bielsa. However, he could get a run on the left flank in the third round of the FA Cup.

Edmondson is a bright young talent from the Leeds academy and could be handed a start against Arteta’s Gunners. 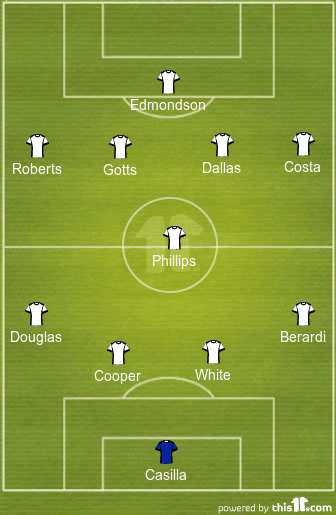