Marcelo Bielsa’s Leeds United visit Birmingham City on Sunday, hoping to bounce back to winning ways in the Championship.

The Whites were held to a 1-1 draw by Preston North End on Boxing Day, with Stuart Dallas’ deflected striker late in the game clinching a point for them. Leeds’ failure to get a victory comes as a slight concern though, as they have now gone winless for three games over the festive period.

However, Bielsa will expect a response from his boys against Birmingham City, who come into the contest on the back of a 1-1 draw with Blackburn Rovers.

Pablo Hernandez has been ruled out for up to four months with a hamstring injury he suffered against Fulham. Adam Forshaw, meanwhile, remains unavailable due to a hip injury.

Casilla hasn’t kept a clean sheet in the last three games, with Leeds conceding six goals. He will be desperate for one on Sunday.

Ayling has been really poor over the last few games. He has to get regain his form quickly or risk getting dropped.

White has been a consistent performer for Leeds United throughout the season and should retain his place in central defence.

Cooper is back in defence after recovering from injury and must start alongside White against Birmingham City.

Alioski had a really good game against Preston on Boxing Day, coming close to scoring a couple of times. He should start at left-back again.

Phillips is crucial to how the Whites operate under Bielsa. The Englishman has locked down his place in the holding role and there’s no way he’ll miss out against Birmingham.

Costa is a tricky player and could be a thorn for the Birmingham defenders on Sunday.

Klich’s work rate is second to nothing. He’s a very important player for the Whites and should retain his place in Bielsa’s XI.

Scored a late equaliser against Preston, albeit via a vicious deflection, to clinch a point for Leeds. Dallas is in really good form and will be hoping to continue on Sunday.

Harrison has improved leaps and bounds this season, nailing down his place on the left flank.

Even though Nketiah looked bright after coming on as a second-half substitute against Preston, Bielsa should stick with Bamford in his starting XI. 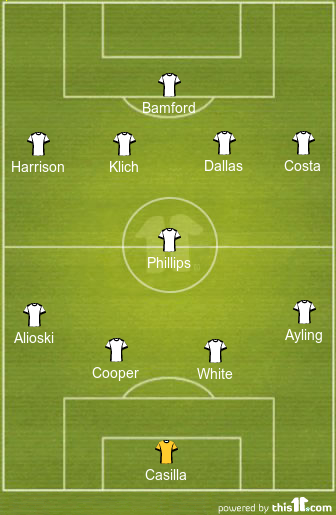