Predicted Liverpool line-up to face Wolves in the Premier League

Liverpool are yet to be beaten in the league this season and the Reds picked up a vital victory against arch-rivals Manchester United last weekend. They are very strong contenders to land the title at the end of the season.

But Klopp will now turn his attention to the clash against Wolverhampton Wanderers at the Molineux Stadium. The Wolves have been very good against big sides this season. Klopp will definitely be wary of a number of potent threats.

Joel Matip, Joe Gomez and Trent Alexander-Arnold are all out for this game and will take a few more weeks to return. James Milner was rested against United last weekend and should be back for this clash.

The Brazilian did make a mistake against the Red Devils but he has made a massive difference in goal for the Reds this season.

Clyne did well in his first start of the season against United last weekend. He will keep his place for this game as well.

The Dutchman can seamlessly play every game for the Reds this season. He will continue to lead them from the back.

The Croatian too was solid against Manchester United last weekend. He will continue to partner Van Dijk at the back.

Robertson has been brilliant for the Reds this season. He has been defensively fruitful and offensively vibrant.

Milner should return to the line-up for this game. His work rate will be very important against a fluid Wolves midfield.

The Brazilian was immaculate against the Red Devils last weekend and will surely keep his place for this game as well.

Keita was very energetic against United and has shown good form in recent weeks. He will keep his place on the left channel of central midfield.

Salah was kept quiet against United but he will continue on the right wing against Wolves. The Egyptian has looked the Salah of last season over the last few weeks.

The Brazilian has been great with the link-up play in the final third but needs to add more goals to his game.

Read more: Liverpool signing this highly talented PSG star would solidify their midfield – could be a good Henderson replacement

The Senegal international scored a superb goal against United despite missing a number of chances against Napoli. A sure starter. 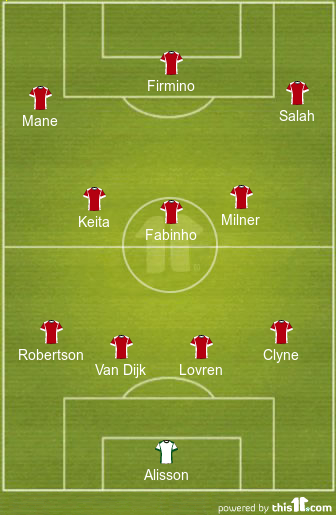