Why Liverpool Are Better Off Without Real Madrid’s Dani Carvajal

Liverpool are reportedly interested in an audacious summer swoop to sign Real Madrid defender Dani Carvajal. The Reds’ attacking unit has been sensational this term and are probably even the best in the Premier League but their midfield and defence could use some work. As Jurgen Klopp readies the team to launch a serious title challenge next season, the German gaffer has identified Carvajal as one of the players who could help them achieve that.

After spending quite a lot of time (and money) to procure Virgil van Dijk from Southampton, the results have been positive for Liverpool. However, to ensure a solid back line, Klopp wants a new right-back and is understood to have been quite impressed by Carvajal’s performances this season.

That said, signing him will certainly not be a walk in the park. Convincing him to leave Santiago Bernabeu in favour of Anfield will be quite a task and as if that was not enough, the player also has a whopping £310m release clause.

Furthermore, his current contract with Real runs until 2022, meaning it will be tough to get the club to agree to a sale. Los Blancos are known to impose exorbitant release clauses for most of their first-team stars and given how rapidly Carvajal has improved, it does not come as a surprise. 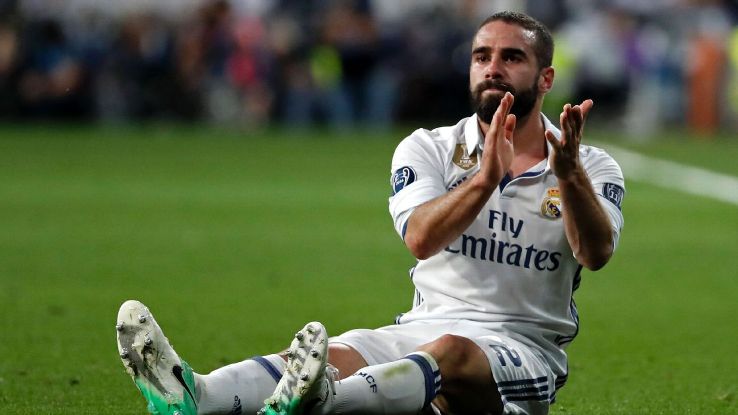 While there is no doubting the 26-year-old’s talent and skills, do Liverpool really need a new right-back?

Out of all the positions that need strengthening at Liverpool, right-back is certainly not one of them. The young Joe Gomez has impressed one and all with his brilliant performances in that area. In fact, his prolific displays even earned him his England debut, which speaks volumes about the kind of influence he has exerted. Meanwhile, they also have Trent Alexander-Arnold, who has also been a sensational young star for the Reds this season.

And, of course, how can one forget about Nathaniel Clyne?

Due to injury, Clyne has been missing out on the action for the longest time and although he has got back to training, the player is yet to gain match fitness.

That day is not far though and once he does, he will have to compete with the likes of Gomez and Alexander-Arnold for his spot.

To bring Carvajal into the mix makes no sense, even more so with a hefty price tag. Hence, Liverpool are truly better off without him and should be looking to spend their money elsewhere.