Chelsea began this game with the chance to move 6 points clear of Arsenal in 5th place. Maurizio Sarri gave starts to David Luiz in defence and Matteo Kovacic in the left side of the midfield. They set out with Eden Hazard taking up the false 9 role with Pedro and Willian on either side of him.

Newcastle began with a five-man defence which had Matt Ritchie playing at left wing-back. Youngsters Isaac Hayden and Sean Longstaff started in midfield with Salomon Rondon operating as a lone striker.

The game began with Chelsea dominating possession and controlling the pace of the game as was expected. While they have been struggling for goals in recent weeks, it took them just 9 mins to break the deadlock in this match. 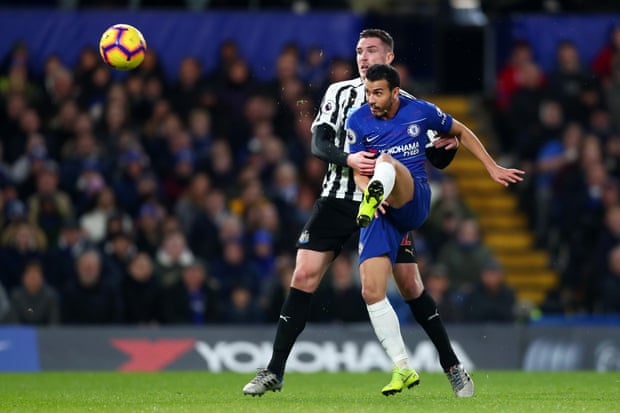 David Luiz expertly spotted a run from Pedro and delivered a defence-splitting long ball. The Spaniard controlled it majestically with his first touch and did even better with the finish to lob the ball over a stranded Martin Dubravka to make it 1-0 to the home side.

In the 40th minute, Newcastle were awarded a corner after some good running from Christian Atsu. Matt Ritchie delivered the ball and it was met in the air by Ciaran Clark who’s header was right in the bottom corner which gave Kepa no chance of saving. 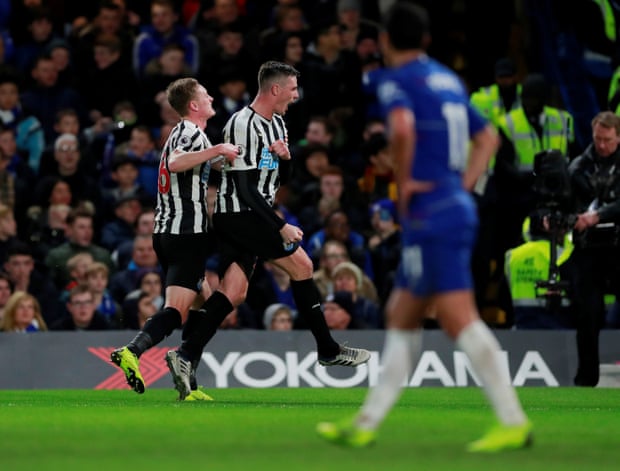 For all of Chelsea possession, they have yet to create any clear goalscoring opportunities. And when Jorginho played a long ball into Willian sending him clean through, the Brazilian’s finishing let him down as he put it the wrong side of the post. A frustrating half for Chelsea, who aside from a moment of magic for the goal, didn’t create much in the Newcastle box.

The second half began with Chelsea showing more purpose and it looked like Sarri had got his message across clearly to the team at half time. Chelsea really started turning the screws and eventually got their reward in the 57th minute.

Eden Hazard turned brilliantly in midfield to run into space before moving it wide to Willian. He held onto the ball until 2 defenders were on him before curling a brilliant shot into the far corner from a rather acute angle to make it 2-1 to the Blues. 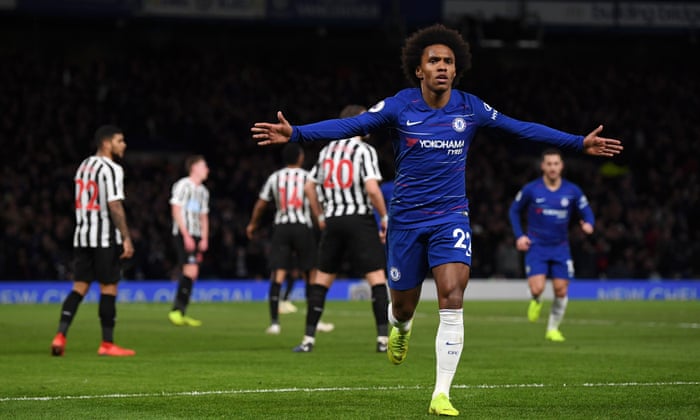 While Newcastle had more than a third of the game to try and get snatch the point, Chelsea’s quick passing and movement allowed them to control the game and see it out with ease.

With the substitute Olivier Giroud coming on as well, Chelsea were able to keep the ball in the Newcastle half with easy position and good rotation. A good win for the Blues who are now just 1 point behind Tottenham who face off against Manchester United tomorrow night.

Here’s the reaction from some ecstatic Chelsea fans –

But but but Willian doesn’t do anything! Saved our bacon today. Hazard a different Level from everyone with that assists. Kova needs to stay on longer.

Awful viewing that. Job done though. 6 points ahead of Arsenal for Top 4! UP THE CHELS!

We need another midfielder that can compete with Jorginho. We definitely have to get Paredes. He’s a very good passer. #COYB