Pep Guardiola’s Manchester City travel to Germany to face off against Borussia Monchengladbach in round five of the group stage fixtures of the UEFA Champions League.

City lies second in the Group C standings, below Barcelona and a win at the Borussia-Park should make their participation in the next round confirmed.

The Citizens won their previous group stage match against Barcelona at the Etihad and are coming into this match on the back of a 2-1 victory against Crystal Palace in the Premier League where Yaya Toure scored both the goals on his return.

Guardiola, however, will be without the services of Toure tonight, as he was not registered for the Champions League, while captain Vincent Kompany will also be left out due to more injury concerns.

How will City line-up against the German outfit? We take a look:

Claudio Bravo will return to the starting XI after missing out City’s CL fixture against Barcelona due to a suspension. Bravo, after a shaky start to life in England, has shown signs of his old self and City will look up to him to keep the Monchengladbach attackers from scoring.

The Serbian full-back has been a constant feature for City this season under Pep Guardiola and while being reasonably solid at the back, he has impressed with his forward play as well.

Expect him to start for the vital clash.

Another solid performer for City this season, the Argentine has been showing good form and will play on Wednesday.

John Stones, after being rested for the encounter at Selhurst Park over the weekend, will be available for selection and will most definitely feature alongside Otamendi.

The English defender has had a great start at City and will hope to continue in the same vein of form on Wednesday.

Guardiola will continue with Bacary Sagna as his preferred right-back on the basis of his solid performance over the weekend against Crystal Palace.

The Brazilian has been the rock in the City side, protecting his defence admirably while at the same time chipping in with crucial goals every now and again.

He has been one of the best players under Guardiola and will be playing an important role against Gladbach.

City’s best player of the season so far. Has looked threatening throughout the season and his creativity and eye for the goal make the Belgian an asset to Citizens.

He has been one of the first names on Guardiola’s team sheet week-in-week-out and expects the same on Wednesday as well.

In Kompany’s absence, Silva should lead the side and continue his impressive displays over the course of the season from a slightly deeper role.

Gundogan was another player who did not feature at Selhurst Park keeping in view the midweek fixture and should most definitely partner Silva in the centre of the park. 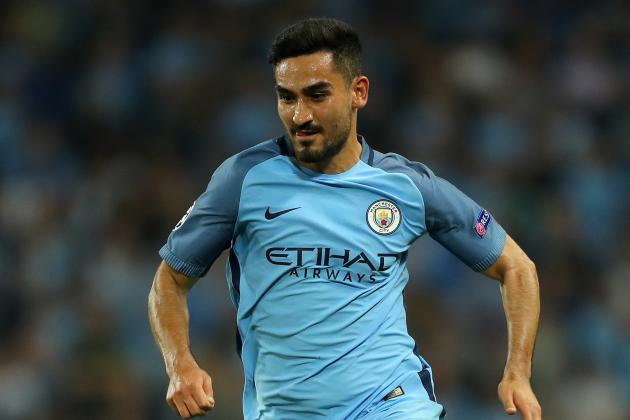 The German playmaker has been terrific for City after his return from injury and will look to impress on his return to his country.

The diminutive winger has been the surprise of the season by far, showing the form of his Liverpool days after a dismal last season.

Sterling has scored 5 times this season and assisted a further 7 goals, establishing himself as one of the key cogs in the City outfit.

The Argentine is by far one of the best marksmen in the Premier League and has shown why he is regarded so highly, with 14 goals in all competitions already this season.

Aguero scored a magnificent hat-trick last time these two sides met at the Etihad and Guardiola will hope to see a similar display from his star striker.