The Confederations Cup begins on Saturday with the hosts Brazil and Japan squaring off in Brasilia. There are a lot of question about the Selecao heading into the tournament, mainly because of the squad chosen by manager Luis Felipe Scolari.  The average age is slightly over 26 years old, and the team has just 411 caps put together which indicates that Felipao is interested in building for future successes. As for Japan, they play an entertaining brand of football, but have lacked that killer instinct up front over the last few major tournaments in which they’ve participated.  Mexico, the CONCACAF representative in Group A, aren’t doing so well either. They’ve won only once out of six games in the hexagonal phase of World Cup qualifying, drawing five other matches. Three of those were at home and finished 0-0. 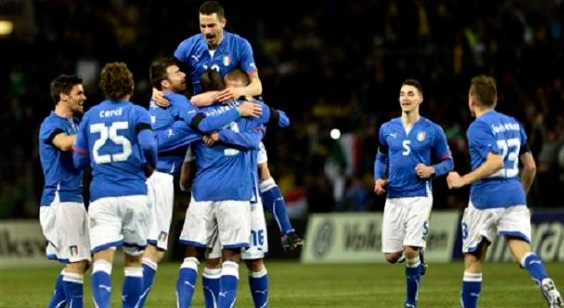 Just like the other three sides in Group A, Italy also entered the tournament with a lot of question marks. The Azzurri’s last two matches haven’t produced a single win and  they drew 0-0 in Prague against the Czech Republic in World Cup qualifying last week. Tuesday’s friendly versus Haiti didn’t see much improvement. Despite Juventus winger Emanuele Giaccherini scoring the fastest goal in the national team’s history striking 19 seconds into the game, the Italians still couldn’t muster a victory. They conceded two late goals to the Haitians after going 2-0 up, causing a ton of worries within the camp and fans alike.

Manager Cesare Prandelli’s patented 4-3-1-2 seems to have been figured out. The centre back pairing of Leonardo Bonucci and Andrea Barzagli has been exposed and look very uncomfortable with just two in the middle. Due to Domenico Criscito’s injury, the left back depth is even thinner than usual, forcing Giorgio Chiellini to start out wide. Chiellini has experience with a four man back line, so he would be the logical choice to be deployed in the centre. Mattia De Sciglio, Ignazio Abate, and Cristian Maggio are the only other options on the flanks, but the latter two are primarily right sided players. De Sciglio may be the best bet for Prandelli on the left side. It’ll mean that Chiellini can start in his preferred role.

Supporters have been calling for a 3-5-2 or some other variation with three centre backs since the Juventus defenders are familiar with the system. Prandelli tested a new formation, but not one that’s a fan favourite. He had the players playing 4-3-2-1 with Mario Balotelli as the lone striker and, surprisingly, Giaccherini in behind him paired with Ricardo Montolivo, although Claudio Marchisio was also used in a more advanced role. Other probable starters in that formation included De Sciglio at left back, and Chiellini at centre back, replacing Bonucci. Abate was wide right and the midfield three consisted of Daniele De Rossi, Andrea Pirlo, and Marchisio or Montolivo as they would switch roles.

Stephan El Shaarawy was notably absent from the training session on Thursday  suffering from a slight muscle pull in his leg, but he’ll be present at practices starting on Friday. Still, it’s worth noting that in 2013, El Shaarawy’s form has declined rapidly at AC Milan. His teammate Balotelli scored 12 goals in 13 matches in his first few months at Milan, but “Il Faraone” has suffered in that time. He bagged just three goals in 20 games in 2013, far below his total of 13 in 18 during the first half of the domestic season. He and Balotelli couldn’t muster anything against Petr Cech and the rest of the Czech defence during their last qualifier. On the other hand, the midfield created little, especially Montolivo, who was operating in behind the strikers. It’s not his natural position, but he’s slowly gaining competence as he participates in more games. Still, the lack of creativity going forward was a major issue and needs addressing.

The players did come off a long, gruelling season, especially El Shaarawy. He made over 50 appearances for club and country, as did many others such as Bonucci and Barzagli. With some relaxation taking place over a couple of weeks, the Azzurri should be rested. Combine that with the improving familiarity among everyone within the Italian squad, the team should be alright come their first fixture against Mexico. Cesare Prandelli also seems to share the same sentiments and is taking lessons from Italy’s last few matches to commence the building of something special starting this June at the Confederations Cup.

“We were a little bit too conservative against Haiti. We knew it could’ve been a struggle to play the day after arriving in Rio, but Haiti wanted to organize this friendly at all costs and we made them happy,” said Prandelli.

“We have to take many aspects into consideration. Most importantly we need to find our physical sharpness. We’ve worked towards this and you could see [on Tuesday vs. Haiti] we lost every single sprint, so we hope in five days the team can begin to deliver.

“Now we have to get back on to the field because we need to work, above all, on motivation.”