Very few players in the world currently divide opinions as Mesut Ozil. Despite a great honeymoon following his move from Real Madrid to London last summer, the German hasn’t been able to live up to his expectations. But why is his marriage with the Gunners looks to be on the rocks? And after last night’s lack-luster performance against Borussia Dortmund, German Daily Bild rated Ozil as someone who ‘didn’t earn his money’.

Mesut Ozil, the very name that, at the close of the transfer window last year, gave Arsenal fans everywhere a sense of excitement. It was on deadline day last season when the news was announced that Wenger had pulled off possibly the signing of the summer -a club record signing of a world-beater and the purchase that was going to lead Arsenal to a bright new future. 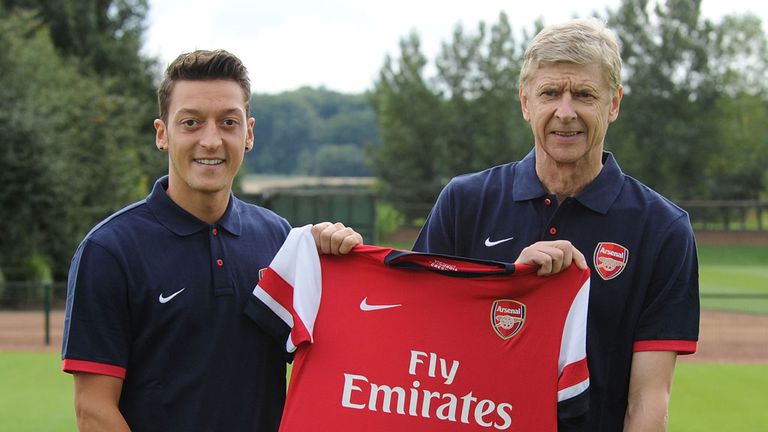 Ozil’s capture were heralded as a new dawn at Arsenal

But despite all the success the team had last season it was one that Ozil may want to forget. He was criticised heavily by the media throughout the campaign and he’ll be looking to put things right as Arsenal look to mount a serious title challenge this year. Many said his performances were lacklustre, not up to the premier league’s physical style of football and he’s already beginning to feel the full brunt of similar criticism in the few games he’s played so far this campaign. But is this constant criticism of the World Cup winning German justified?

Ozil is an enigmatic presence, somebody that goes through the majority of matches at his own pace whilst maintaining the genius ability to be able to spot a run and create goals for others around him. This is something that many Arsenal fans and pundits alike fail to recognise, he is a needy little genius and isn’t somebody who is going to carry the team on his own. His work rate has been questioned as well, you won’t find him tracking back for the team as impressively as say the like of new boy Alexis Sanchez, but if played centrally and with talented players around him he will shine as he did at Madrid. This though could also be seen as a weakness in Ozil’s game, his ability is there for all to see but to fully utilise this ability he needs the world’s very best players around him to flourish, something which at Arsenal is maybe not the case when you compare it to the players he had with him at Real.

Another criticism thrown at Ozil is that he doesn’t perform well in the big games, a criticism that after watching the City-Arsenal game at the weekend seems somewhat justified. It was a poor performance from the German as Arsenal were pegged back by City who claimed a point at the Emirates. He seemed wasteful, City were trying to control it with their slick passing game and Arsenal looked to hit them on the counter whenever they could with the pace of Sanchez and Welbeck. But whenever Ozil got it in a forward position on the counter he seemed to slow things down and this negatively affected the gunners attacking performance.

This though could be down to the fact that he was being played out of position, he was deployed wide left rather than down the middle and with the work rate of Zabaleta and the pace of Navas, Ozil struggled. Ozil himself isn’t exactly the quickest and isn’t a wide midfielder at all, to fully get the best out of him Wenger must play him in that number 10 role behind the striker. Mourinho said of Ozil when he joined Arsenal that he is the best number 10 in the world so why doesn’t Wenger play him there?

But ultimately it is down to him to improve and whether or not he is being played out of position he should use the undoubted talent at his disposal to help his team and avoid going missing in the bigger games. But there are a few things to remember, he wasn’t a flop last season as games such as Napoli and Everton at home suggest and is capable of producing when it matters like his performance in the world cup final where he played out wide, suggesting that he can play there if he is in the right mind-set. Ozil with the World Cup

He possesses a talent that needs to be cherished by Arsenal fans, not ignored. Regardless of whether he’s been in top form or not he has had a summer to celebrate. He’s won the FA cup with Arsenal and then the World cup with Germany. And he is clearly still buzzing about it. “I’m really proud. Every footballer wants to win this great trophy but it is very, very rare and I managed it. And I won it in Brazil where the atmosphere was fantastic, especially in the games against Brazil and Argentina where it was very dramatic. We became world champions because we were very strong and stayed together as a team. We had this unique team spirit”.

Winning the world cup is bound to have an effect on any player and for Arsenal fans they will be hoping it has a positive one rather than negative one on Ozil so he can show everybody that he still is the same Mesut Ozil as the one that finished with the most domestic assists in Europe in 2011 and 2012 and the one who tore England apart in 2010 in Bloemfontein. Place him at the centre with the right players in suitable environment and enjoy as the left footed star wreaks havoc in the opposition final third.