Arsenal welcome Manchester City to the Emirates Stadium in what looks a cracking Premier League contest on Sunday.

Despite beating West Ham on Monday evening and securing Europa League qualification with a 2-2 draw against Standard Liege in Belgium on Thursday, the Gunners have been far from convincing during Freddie Ljungberg’s brief reign as interim boss.

The home side will have to be at their very best to beat Manchester City, who trail runaway leaders Liverpool by a massive 14 points after the 2-1 defeat in the Manchester derby last weekend.

Kieran Tierney is expected to be absent for a long period after dislocating his shoulder, while Granit Xhaka is also out because of concussion. Hector Bellerin withdrew from the side to face West Ham because of a tight hamstring in the warm-up but he could be back on Sunday.

Nicolas Pepe missed the Standard Liege game with a bruised knee but is expected to be fit for the City game.

The German has been one of the shining lights in an otherwise disappointing campaign for Arsenal. He’ll keep his place in goal.

Bellerin has to be at the top of his game to keep the in-form Sterling at bay.

Chambers was decent against West Ham at the London Stadium and should keep his place in defence.

The Greek was withdrawn in the second half against Standard Liege in what was a tactical switch but he is expected to be on the team sheet against Man City.

Kolasinac had a good game against West Ham and will be raring to make a mark on Sunday as well.

The Uruguayan was rested against Standard Liege but he is expected to start the Premier League fixture on Sunday.

Granit Xhaka is ruled out and hence, the young Guendouzi should start this game. He has been brilliant this season and would be hoping to continue his good form.

Scored a really good goal in the victory over West Ham and made an impact off the bench against Standard Liege. Martinelli is expected to start on Sunday.

Ozil has been a fixture in Ljungberg’s XI and should be crucial for the Gunners in opening up City’s defence at the weekend.

Scored a sumptuous goal in the 3-1 victory over West Ham and will be raring to build on it against Pep Guardiola’s side.

Aubameyang is a natural goalscorer and should lead Arsenal’s attack on Sunday. 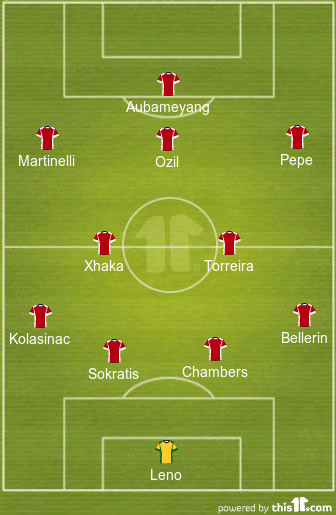