Manchester United’s fortunes have recently been reversed by their former striking sensation Ole Gunnar Solskjaer, who has taken over from Jose Mourinho and made it look like the Old Manchester United were never gone.

The form on display by players like Paul Pogba and Marcus Rashford over the past couple of months clearly show that Mourinho was a part of the problem too and not the attitude of the players alone.

One good transfer window is enough to turn this team of winners into actual title contenders and they must use the available funds smartly in the upcoming transfer window.

Sky Sports have suggested that Manchester United are keen on signing Senegal international Kalidou Koulibaly from Napoli while the Sun reports that Juventus speedster Douglas Costa could be another player on Ed Woodward’s wish list.

Koulibaly is a no-nonsense centre-half who will plug the gaping hole at the back and sort out their defensive fragilities as well. Douglas Costa is a winger who can add a certain zing that is currently missing in United’s ever-so-talented attack.

Here’s how they could line up at the start of next season if the deals for Costa and Koulibaly are completed:

The Spaniard has singlehandedly won United many matches and is one of the top goalkeepers in the world, if not the best.

The 19-year-old from Portugal has been excellent when he has been called upon and should make the starting role his own next season.

While Victor Lindelof might argue with this call, Bailly is United’s most adaptive centre-half and would be perfect to partner Kalidou Koulibaly.

The Napoli man would slot right into the heart of United’s defence with ease and over time, he may even be able to take over the captaincy.

The Englishman is finally having a full season, with no injuries hindering his progress. He has been very good and will become a key player in the coming years.

The English trickster is more than capable of playing on the flanks but he is more effective in the midfield role, which is where he would fit in.

The former Chelsea man has been an inspired signing for United and he has certainly toughened up the team drastically.

A World Cup winner with France, Pogba has been a man reborn under Ole and he definitely has a long future at Old Trafford.

This Juventus speed demon possesses the kind of acceleration and pace that could send some of the best defenders wild. His movement will be very important to their style of play.

The young Englishman has been a revelation since breaking into the first-team and is now one of the highly rated youngsters in world football.

The Frenchman has also come back to life after Mourinho’s departure and his ability to cut in and strike the ball makes him an ever-present threat. 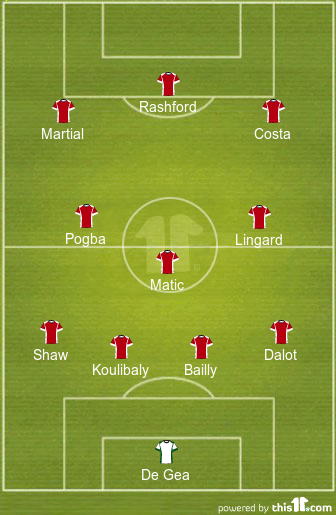