Everton have appointed Marco Silva as their new manager and many fans believe he can replicate or even better David Moyes’ success on Merseyside. Under Moyes, Everton regularly finished in the top half of the Premier League table and qualified for Europe. And Silva could be the man to bring the European nights back at Goodison Park once again.

The Portuguese tactician needs to bolster his squad in the summer if he is serious about Everton doing well next season. And Norwich City starlet James Maddison is reportedly on the radar of the Toffees.

Here’s how Everton could line-up if they manage to snap up Maddison. Silva preferred a 4-3-3 at Watford and that formation could work well with the Toffees too.

Everton midfield with Maddison in the team

Gueye has been a sensation ever since his breakthrough season with Aston Villa in the 2015/16 campaign. He was signed by Everton in the summer of 2016, following the Villains’ relegation from the Premier League. He is currently one of the most important players at Everton. Gueye is the midfield powerhouse, who will be tasked with winning the ball back under Silva.

Davies, who plays the role of a box-to-box midfielder, is a promising youngster and has a big future ahead of him. Silva could opt for Schneiderlin if he wishes to tighten things up in the middle of the park.

If Maddison is signed, he will be at the tip of the midfield assigned a creative role. The youngster will have freedom and will play as a No.10, such as he did at Norwich. Maddison is known for his dribbling and set-piece delivery. He can also create and score goals and can take some burden off Gylfi Sigurdsson.

Walcott has been impressive since arriving at Everton in January. He has finally stepped out of his comfort zone at Arsenal and is ready for a new challenge. Silva could do wonders with Walcott. The England international is a talented player, who just needs to stay fit and receive the correct guidance.

Tosun is likely to keep his spot as a striker next season. He arrived from Besiktas in January and initially struggled to adapt to the Premier League. But he soon found his feet and managed to score 5 goals in the league. With a pre-season behind him, Tosun is expected to deliver the goods next season.

Sigurdsson, who is Everton’s most expensive signing endured an inconsistent first season on Merseyside. There is no doubt about his quality but he needs to up his game next season. The midfielder played at left-wing last season and Silva could deploy him in a similar role next term. 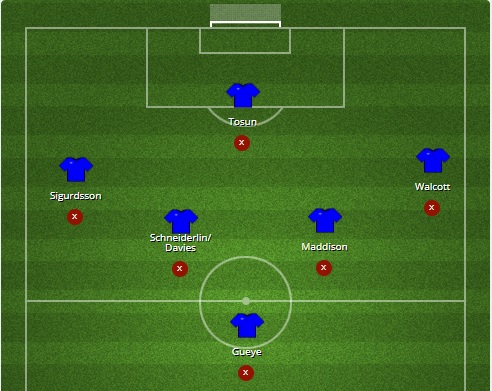