Borussia Dortmund’s Christian Pulisic has been a subject of grave transfer speculations in the past month or so. The Telegraph reported in November that the German club is willing to strike a deal of close to £70m with either of Premier League giants Liverpool or Chelsea – as long as he doesn’t stay in Germany.

During the Christmas period, new reports have emerged saying that Pulisic could be on his way out of the Signal Iduna Park next month as Dortmund have apparently contacted with Borussia Monchengladbach over the possibility of signing Thorgan Hazard. And Pulisic prefers Liverpool over Chelsea, chiefly because of his past relations with the Reds manager Jurgen Klopp.

If the Merseysiders do manage to pull this deal off, it will be a massive coup for them in a season where they are challenging for the league title and are still in the Champions League. Below we take a look at a dream Liverpool lineup the probable January addition – Christian Pulisic.

The Brazilian has been a fantastic addition and is doing a stirring job in goal. He starts every league and Champions League game.

The amount of progress this young kid has made in the past 12 months is just astonishing. He is now the first-choice right-back.

He has an ankle injury but he is expected to be back by the first week of January. And if fit, Gomez is the first-choice partner for Virgil van Dijk.

The best signing of the Klopp-era, especially because of the way he arrived in the team in last January and just took command of that defence.

From being in a relegated Hull City team to being a first-choice left-back in a team that reached the Champions League final and now challenging for the title; some progress that, from the Scot. He is an absolute machine.

He had a slow start to his life at Liverpool but he is slowly getting into his stride. He will be an integral part of this team in the second half of this season.

The Dutchman has been a consistent figure in the midfield and the new signings have motivated him to do well week in week out.

He is a support striker these days, working in between the lines and having the freedom to roam around and affect the play.

The Senegalese starts on the left wing as usual. He scores goals and provides assists even when he is having a bad game, a sign of a special player.

Read More: With pace and aerial ability, this young Liverpool outcast could be the man to save Crystal Palace’s season and Hodgson must get him

The main man has been playing up front these days. It has reduced his defensive work and allowed him to concentrate on creating goal-scoring moments. 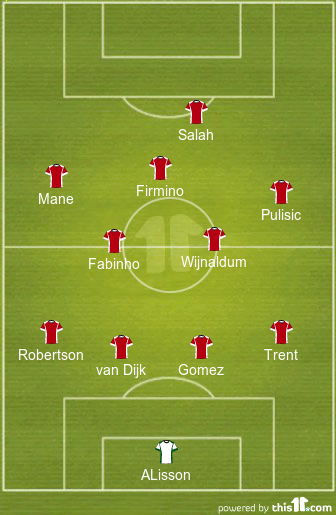