According to a report in Football.London, Chelsea manager Maurizio Sarri is keen on signing striker Gonzalo Higuain on a permanent deal from Juventus. The Argentine is currently on loan at AC Milan for this season. However, the former Napoli manager is interested in getting the 31-year-old with the possibility of Alvaro Morata going the other way to Turin.

This could be the most interesting swap deal in Europe that could fulfil the requirements of both clubs. While Chelsea need a goal-scorer and Higuain can perform that role, Juventus can welcome back Morata, who was fantastic for them when he was there on loan from Real Madrid.

Furthermore, the Spaniard has been a failure in the Premier League, hence, offloading him would make sense for the Blues. Here’s how Sarri’s men could line up if Higuain arrives at Stamford Bridge next month:

The Spaniard has done well since arriving in the summer. He will start every league game and a few cup games.

The experience of Azpilicueta is always a key to how Chelsea play. He leads the team in the absence of Gary Cahill and is currently doing a good job.

The German has been fantastic this season. He deserves to start almost every game.

Luiz has had a great season as well, apart from the Spurs horror show. His partnership with Rudiger is going along well.

There were question marks on whether the Spaniard will be able to play at left-back. The player has answered that with good performances this year. He still needs to learn to make that position his own.

Jorginho symbolises the system that Sarri likes to play. The Italian takes the ball from the back and looks to pass the ball forward.

He is not playing in his natural position but the Frenchman remains a key player in the team. His work rate is just fantastic

Mateo Kovacic is a loanee from Real Madrid and might not stay here after this season. Barkley on the left-hand side of a midfield three could be the way forward.

He is their best player and the club will hope that the Belgian stays here for as long as possible.

He is a proper finisher and could work well with Hazard, forming an incredible partnership.

Read More: Why this world-class Bundesliga star would be a better fit for Chelsea than this English veteran

Out of Willian and Pedro, the latter seems to be a better choice in terms of delivering the final product. 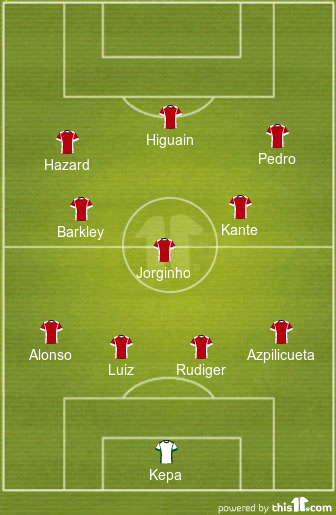